Woe be unto she who dares to be hit by a bicycle with unshaven legs, a tale of tolerance in Chile

The other day (Monday, to be exact), I was minding my own business, walking across what in English I would call the park blocks of the Alameda. The Alameda is the main street, and for many blocks, it has a central area that you can bike or walk in. The bike path is, well, awful if you are headed east, as the noses of all the ramps are broken off. If you are headed west, you get to play a game of “where’s the bikepath” as it dips down over small flights of stairs. Raise your hand if you’ve ever had to stop short or flown down a flight of stairs. Oh wait, I need both hands for typing.

So I was standing there, far from the bike path, waiting for the light to turn green so I could keep walking east. When from behind, I got scraped/hit by a bike. It was painful, but mostly surprising. And the cyclist who hit me did not peek back to see how I was, or stop to see how I was doing. He flew across the Alameda (with a red light) to get away, and then proceeded to ride slowly up the sidewalk, which makes me wonder just how much of a hurry he was really in.

But I was grrrrr. Very grrrrr. Also bleeding. So took a picture of the aggrieved leg, and posted it to a cyclists group here, announcing that I had been hit, and that I was leaving that photo as a gift for the “saco de weas” (roughly, piece of shit) who had hit me. And that if I found him, I’d give him another. In truth, if I found him, I would demand an apology. Because I’m like that. I described his bike and helmet, and asked for help in figuring out who he was.

Anyway, back to the photo. You’re thinking, hit by a bike, wtf? what does that even look like? It looks like this: 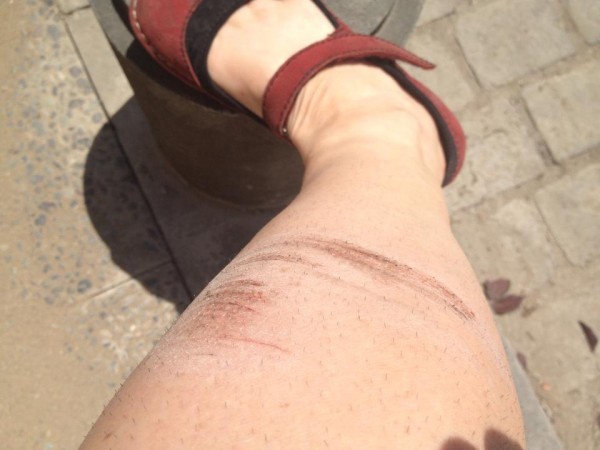 What followed requires you to sit down, and you might want to eat something, so your neighbors can’t hear so clearly when you start screaming “sacos de weas, sacos de weas” at the top of your lungs.

It seems that to many of the poor suffering facebook users, who had to look at this photo of my leg, the interesting point was neither the fact that I had been hit, nor how absolutely adorable my red suede mary jane shoes are, but the fact that, in fact. I have leg hair.

God, I hope I didn’t catch you unaware! I am so sorry.

Ok, first of all, there were several comments of the “I can’t believe this happened, some cyclists are so irresponsible, this is terrible, hope you feel better, so sorry, etc.” We like these people. We would be happy to share bike lane space with them.

And then the following comments appeared:

Gotta do some weeding
Someone should buy her pruning shears
You have to protect your image
The guy who hit you is still trying to patch his tire, he’s tried 10 patches already, and they still won’t hold
It’s a matter of hygiene
and my favorite:

“se abra depilado” which should mean “will she have shaved her legs yet,” but in fact means something like “it opens shaved,” because the smartypants who wrote it also has really awesome spelling skills.

This devolved into people squabbling back and forth about whether or not it is machista to make such comments. I turned off the notifications because I have better things to do with my life, but went back to post the following:

First of all, I’d like to thank those of you who were sympathetic about how I was scared and angry (which I am less so now) regarding what happened with this person who is supposedly a “member of the tribe.” The accident was a product of his own lack of manners and education (Education here does double duty for actual education and also for how you were raised).

I am also fascinated by the obsession with whether I shave my legs or not, and how often. It just demonstrates that for some people, the purpose of a woman’s appearance is to comment on it.

With regard to the lack of manners, I have no solution. You’d have to look at how your parents raised you. But in terms of education, I offer the following: Fish have scales. Birds have feathers. Mammals have hair. I am a mammal. So what?

And the commentary goes on and on. I knew I was opening a very teeny tiny Pandora’s box in that I hadn’t shaved my legs in a few days. I was on my way to a lunch with a couple who are friends of my sister’s. I couldn’t imagine they’d be touching my legs, so why does it matter?

And why does it matter at all? This is not a tirade about whether you should or shouldn’t shave your legs. To be quite honest, I don’t care. But it is worth considering how the idea of a woman who has not made her legs touch-ready for the hair averse can cause such a scandal.

In the words of a good male friend of mine, who surely has studied more feminist theory than I have, “the problem is that you addressed the group because your bodily integrity had been compromised. Some of them reacted to continue violating your bodily integrity.” (paraphrasing)

And the leg hair issue is cultural. It feels like mainstream women here play along with the masquerade of being hairless, to placate or attract or keep the men in their lives. To be honest, I’m almost glad I hadn’t shaved my legs recently, so that this topic could come up. The cultural norms are different, and to me, they do not seem to follow any logic. I cannot count the number of times I have seen Chilena women on the street plucking their eyebrows or chin hair (on the bus, in their car, on a bench waiting for friends), or squeezing their mate’s pimples while seated on a bench in a park. Yet show one prickly leg (which to be honest, they must have eagle eyes or enlarged the hell out of that photo to get so incensed), and the world goes up in flames.

I have, of course, turned off the notifications for the original post (though you are welcome to comment here, I would actually be interested in what you have to say). I have no interest in hearing how people feel about my leg hair. I do think that cyclists need to hold themselves to a somewhat higher standard re: running down middle-aged ladies (or anyone) in the street, and take responsibility for imprudent actions, with, I don’t know, an apology.

So in light of that, I do apologize for being so vile as to get run down on the street by a bicycle and then posting my wound on Facebook for all (or some) to see. As the owner of an unshaven leg, I deserved to get hit and I deserve the insults. Or so some of these clowns would have me believe.

I know the few people behind the hygiene/pruning shears comments are probably social misfits. But that’s the fun of the social misfit. They have no filter, so they say what other people are probably thinking. Luckily I am old enough, and come from the kind of culture where I can listen to this asshattery and mentally send them to the “damn”, top of the hill, or even to fry monkeys (fun Chilean expressions).

I’ll be the one with the allbriefs on, until the oozing stops. What, you ask? I did a double-take, too. These were the cheapest bandaids at the pharmacy. On the bottom, in small print, it says “adhesión no agresiva.”

Non-agression. Too bad they don’t sell that, too. 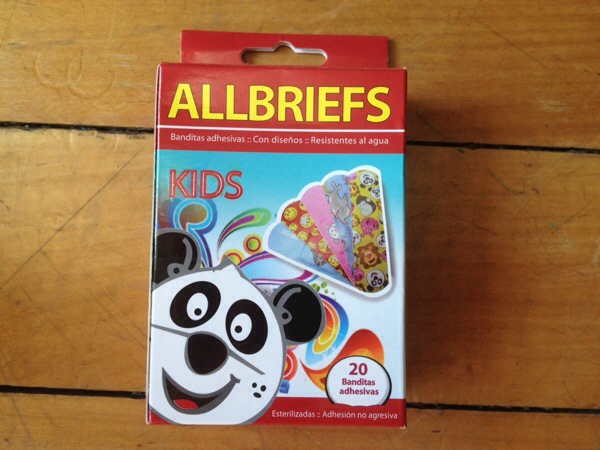