The case of the yuyo, and the Quechua word that has spread, well… like a weed 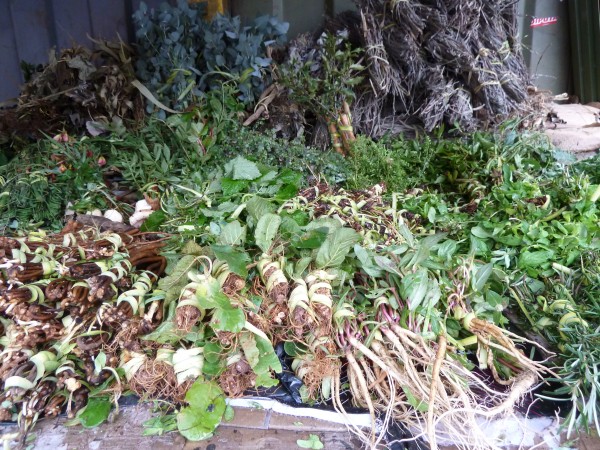 In Paraguay the land of so very much mate, it is often very hot, which does not stop people from drinking mate hot. But you can also drink it cold. At this point, it is called tereré, and it is fabulous, and is getting me through much of the summer here in Chile, though I brew it in a coffee filter because my current mate is too fine to drink through the bombilla, and what the hell.

Paraguayans often mix herbs into the mate, dried ones, like boldo or mint. Boldo has an evergreeny taste to it, an a tiny touch of camphor. Sounds awful, and the first 20 times I drank boldo tea, I thought it tasted like cat pee smells. And yet now I like it. Whatever could that mean? Anyway, into mate (which is dry, and drunk hot), you throw some dried herbs. You can even buy it with the herbs already mixed in, mint, boldo, and even orange rind.

But into the tereré drunk in Paraguay (not sure about Brazil), you put fresh herbs. Like lemongrass or fresh mint or a bunch of other things that you can find tied up, bundled or stacked on a table that lies before a woman with a large wooden mortar and pestle. That woman is called a yuyera. An -era or -ero suffix means, person who deals with the thing that precedes it. So a mesero waits on tables and a panadero bakes bread. And a yuyera…

Grinds yuyo. Yuyo are these fresh herbs/plants, collectively. This I filed away in my head for future use, and one day, as I was flipping through my mental list of words I think are funny or interesting to say, I came across cochayuyo. I can’t explain exactly how, but you kind of know when a word is not of Spanish origin. It has a sound pattern that’s odd, varies in spelling, lots of repetition. Often in Chile it has a -hue at the end. But there’s usually something. And I knew cochayuyo was not originally used in Spanish, but I’d never really thought about what it meant. 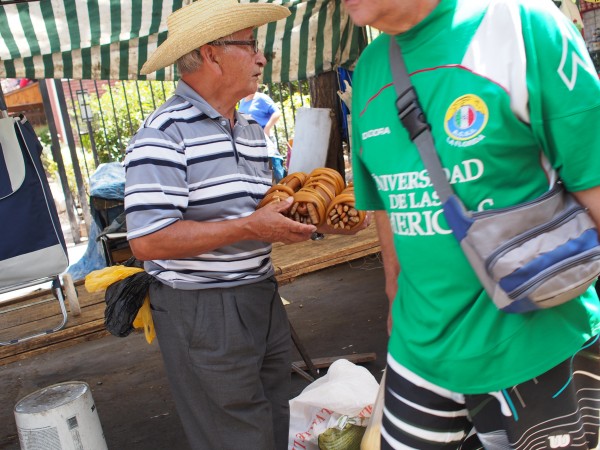 First, let me explain, cochayuyo is a giant kelp that kids are given to teethe on, and Chileans grow up either loving or hating. It shows up in salads and empanadas sometimes, or sometimes just in the arms of a man you routinely see on the street at the feria. And I thought to myself, yuyo… That sounds familiar. And so does cocha (another non-Spanish word). Like Cochabamba, the city in Bolivia. Or Cochamó, the town with access to great rock climbing in Chile, near the Argentine border and just past Lago Todos Santos.

So I looked in my trusty Diccionario de La Lengua Española, which I bought in Bío Bío (the flea market, not the region), and which I love more than is probably normal. And I found that cocha is Quechua (an indigenous language spoken in parts of the Andes) for lagoon or body of water. Lagoon herbs. That’s what cochayuyo is, weeds that come from the water. Giant kelp.

I thought of this just the other day, when I was going through an old notepad I’d brought with me to the south of Chile, and read in my notes that a certain yellow plant that blooms on the side of the road in Chiloé is called yuyo. Another of my dictionary friends, Diccionario del Uso de Español en Chile reports that in Chile, yuyo is not just a weed, it is a particular weed that grows near stables and in humid terrain, which has branching yellow flowers, and that the leaves are eaten as a salad or sautéed, as you would with spinach.

And then I wondered how this one word could be used all the way from Paraguay down to the south of Chile, two countries where little or no Quechua are spoken. And then I ripped up some mint and put it in the water for my tereré and thought about, but did not eat the cochayuyo that’s been in my cabinet for at least a year, and which I bought from that man pictured above.

And of course, I also thought of my newly-learned expression, “vale yuyo” and how, if I ever hear someone say it, I will probably jump up and down in joy, even if it does mean something is worthless. Any takers?