The anatomy of the caja (cashier’s station) in Chile

I was recently in the Vega (big fruit and veg market), looking at the hot peppers (yes, there really is a stand where they sell only hot peppers, smoked and unsmoked, red and green), and a friend of mine, who runs walking tours in Santiago came up behind me, and started joking that though I have a bike, I’m really a big proponent of cars. He introduced me to the group of four tour participants, women from Seattle, New Jersey and DC, and said, “this is Eileen, she’s a travel writer.” One of them turned to me and said, “so you really do what you write about?” And I said, “Well, I do.” I felt like I’d been caught in my natural habitat.

Speaking of natural habitats, I also stopped into my favorite cheese shop (Arturito’s, several locations, including one in Tirso de Molina, where I took this pic). It’s not that the cheese is so incredibly amazing, it’s that the prices are not scandalously high. A brick of cream cheese costs, for example, about $1.85 instead of the $4.25 it can cost in the supermarket. On this day I just bought parmesean and cream cheese, but they also have good prices on hard goat cheese and blue cheese, and sometimes my favorite, queso de oveja (sheep cheese, similar in style/taste to Manchego). They also sell various canned and jarred things, coconut milk and eggplant dip, among other tasty items.

I went to pay, and I came upon the following scene, which is so ripe for explanation that I couldn’t not take a photo. 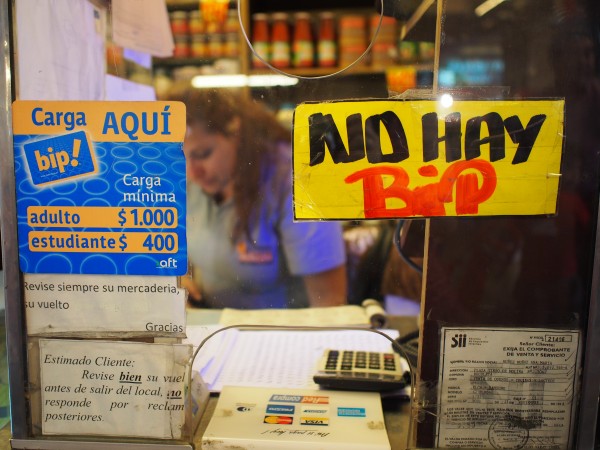 1. The station. When you see a station like this, or when you are given a chit for what you’d like to buy, whether that be in a small department store like PreUnic, a cheese shop, or even some stationary stores, you will told to “cancelar en caja.” That means, pay at the cashier station. In many places, the cash register (and the person who works it, the cajer@ *) will be in a little glass booth.

2. La boleta. So you go to the station, hand in your chit, and the amount of money indicated on it, and pass it to the cashier. He/She will fill out a little piece of paper that is usually white, yellow or pink. This is a sales record for the company for tax purposes, and you are given one, too. You don’t need it so much as it assures you that the company you are patronizing is not defrauding the SII (explained below).

3. The certificate that says SII (lower right side). That’s the Servicios de Impuestos Internos. Don’t get on their bad side. This is the Chilean version of the IRS, but we have a lot more contact with them, because we pay them monthly. Looks like Arturitos is in good standing.

4. Signs on lower left side. Two signs that remind you to count your change and make sure you got the right products. The change I’ve never had a problem with, but one time I did almost take someone else’s goods, and they would have ended up with mine. So yes, you should check.

5. Blue and yellow sign saying Recarga BIP. The Bip card, pronounced beep, because that’s the sound it makes when you wave your card over the sensor. This is what we use to get on the metro and the bus. You can buy tickets for the metro, but not the bus, but a) then you have to stand on line to get a ticket and b) you don’t have the same free transfer as if you’d used a card.

You can load up your BIP card with money and use it on either the metro or the bus. I normally put money on the BIP in the metro at the boletería. But for people who never take the metro, that makes no sense, and is inconvenient. So many stores and storefronts allow you to charge your BIP there, instead.

6. Last sign saying, “No Hay BIP.” This is an English to Spanish departure. If I had a BIP-charging system and it was not functioning, I might write, “No BIP today.” or “BIP out of order.” Instead, they’ve used hay, which means there is or there are. No hay means there isn’t or there aren’t. This is used for the presence or absence of many things, such as bread (No hay pan/ hay pan). But in this case we are not really talking about the presence or absence of BIP (or the BIP-charging machine). It is there, but it is just not working. At any rate, everyone understands what it means, which in this case is, if you want to charge your BIP, you’re going to have to go down to the ticket booth at the closest metro, called Cal y Canto. But at least you’ll have some well-priced cheese/hearts of palm/capers etc. to sustain you.

Like the anatomy of inanimate objects? Me, too. Here’s another one, about a Chilean pastry shop window.

* I wrote cajer@. The word is cajero for a man, or cajera for a woman. Historically, inclusive language proponents have abbreviated this cajero/a. But just as him/her and s/he are ugly and unwieldy when written, cajero/a looks silly. In comes the arroba (@). Since that looks like both an a and an o, people use it in writing to do double duty in words like cajer@, or really any o-to-a changing noun. When I say “people” that doesn’t mean everyone, it’s slightly new and countercultural, and most often seen online, in text messages, etc.