Cranberries and Sweet Potatoes (and a grammar lesson) in Santiago, oh my!

In the before times, it was hard to find sweet potatoes for Thanksgiving in Santiago. You had to go back to the Galpón de Chacareros, in the very northmost part of the Vega. There, on the right side of the left most aisle, there would be a man with some straggly little sweet potatoes. They were harvested by hand, he would explain, noting their cost. The machine harvested sweet potatoes get bruised, and don’t last long. And sweet potatoes grow in the fall, and Thanksgiving has the audacity to fall in the spring down here in upsidedownlandia.

And all around the gringo Thanksgiving circuit, people would ask: have you seen sweet potatoes? do you know where I can get sweet potatoes? has anyone seen any? The supply was so small, that sometimes I wouldn’t even tell people where I got them from, until the day of. Then began a several years long period when I went to my family’s Thanksgiving in NY, where sweet potatoes were easy to find, and strangely, so were asparagus, which were probably coming from Chile, perhaps even on the same plane with me.

Now (I’m talking about nine years on), goods are more available, and the rising number of Peruvian immigrants has changed the demand at the local ferias. In my local feria (on esperanza, in Barrio Yungay), there are three vendors selling Peruvian goods, which include white and orange sweet potatoes, mangoes, granadilla dulce (no idea how to say this in English, it’s built a bit like a passion fruit, but the pulp is lightly sweet), rocoto (a squat-to-round hot red pepper), limónes de pica. These are almost limes as far as I can tell, and the fact that we call them limón de pica means that we think they grow in Pica, which is an oasis town near Iquique in the north of Chile. I say that we think they grow there, because I recently found out that the Chilean papaya (small, only eaten stewed and with a lot of sugar, and no thanks, I’m full (even if I’m not)), which everyone says is from La Serena, is not from La Serena at all, but from Caldera.

Speaking of things that are grown in Chile and that used to be hard to find, is the quintessential (huh, does that mean five times essential? it should) cranberry. We (apparently) are a major exporter of cranberries to the rest of the world, somewhere there are cranberry farms. However, I have never seen a fresh cranberry anywhere in Chile. It used to even be difficult to get dried cranberries here. First these came either in small bags, from Pucón (in the near south, about 12 hours from Santiago), or sometimes as craisins in the super market. There was a period of time when people were calling them arándanos, which means blueberries. That was a time when we didn’t really get blueberries, and anyway, they are clearly not the same thing, one growing in water, the other on a bush, one inedible raw, the other one tasty any way you please.

Now they’re called cranberries, with the accent on the first e, like so: cran-BERR-ies, as Spanish is wont to throw the accent on an s-ending word onto the penúltima (which I just realized is a palabra esdrújula accent, which means that the accent goes on the antepenultimate syllable. I also just found out for you, dear reader that this tendency to put the accent on the second to last syllable if the word ends with a an -n, -s, or ch, makes for a palabra llana. That is the first time I have ever heard the word llana, but it reminds me of llama, which this is not. It is a guanaco. They are similar to llamas, and this road I was on on a recent camping trip was teeming with them. Also, I double checked esdrújula and landed on llana on this handy page in Spanish on Spanish grammar. 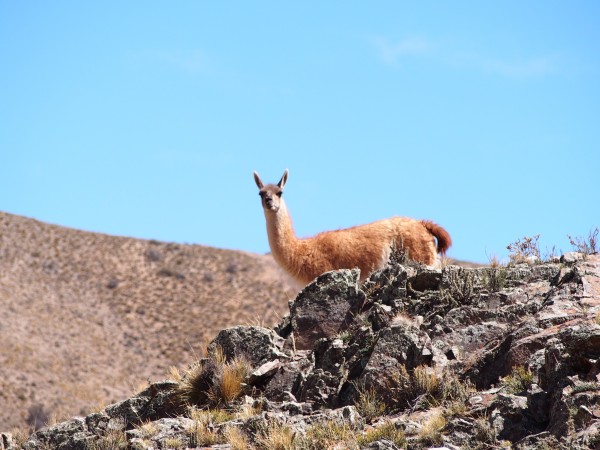 Oh right. Cranberries. So now we get them dried. Yay! except booooo. I’m not a huge fan. But I have simultaneously found a use for them, and found an awesome Thanksgiving hack for those of you who don’t want to spend nearly $4.00 on a can of cranberry sauce which floated across the ocean blue (or grey, as the case may be) to get to your local Jumbo, the supermarket home of many foods gringo.

And here is my Chile-based Thanksgiving cranberry sauce hack. We ate it plentifully at the Thanksgiving I went to, people said they liked it, served themselves more, and did not ask to open the can of cranberry sauce (though maybe that’s because it would have been rude?) 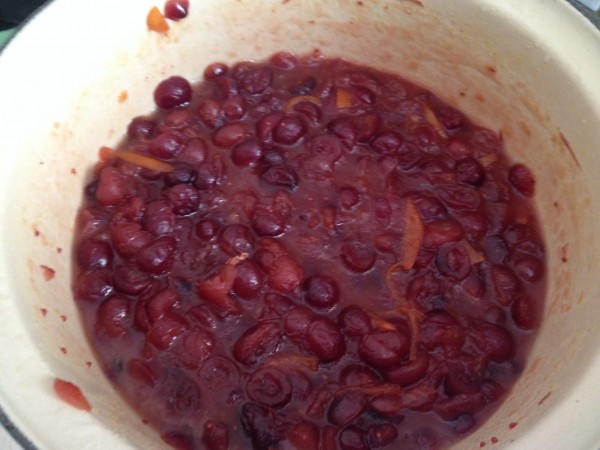 1.5 cups dried cranberries. Do not buy craisins, again with the floating, plus they are crazy expensive. Buy them in the Vega, at a stall where they sell dried things. I eyeballed how much I thought 1.5 cups would be, maybe about 250 grams?
1/3 cup citrus juice. I juiced mandarins/clementines/small orange citrus that nobody can agree on the name of. They’re maybe a little tangeriney? Anyway, juice these until you get 1/3 of a cup. You could use orange, or probably cranberry here, too.
7 thinly sliced kumquats. What? We get kumquats now. If you didn’t have kumquats, I’d probably zest some orange and throw some chunks of orange in, too. But we had kumquats, at Jumbo, naturally.
2 cups water

Combine, and simmer uncovered about 35 minutes.

1.5 tsp corn starch into 1/4 cup cold water, then pour this water into your berries. Give it a whirl, and then turn off the flame.

Chill, and serve. It’s not quite as glossy as store bought, but a damn good facsimile. And yes, I realize Thanksgiving is over for this year, but I have it on damn good authority that it’s going to roll around next year as well. And though maybe we will get fresh cranberries in Santiago by then, we also might not. And in any event, I will be ready.