A hit, a hiss (mit?) and a miss, another version of Santiago Hit or Miss

Reviewing Holm, a salad place in Providencia, Metissage, a French bakery/café in “lower” Vitacura, and Gaho, a café in kind of SE Providencia.

I am beginning to notice that I drink much more coffee than I eat food out. Perhaps this will change. Or perhaps not. In addition, there is the question of whether I’d like to link to the places with websites or not. I could. Or I could not. I’m sure restos would be happy to see positive talk. I am not so clear on me talking trash about where I think they could use help. What say you, oh reader? 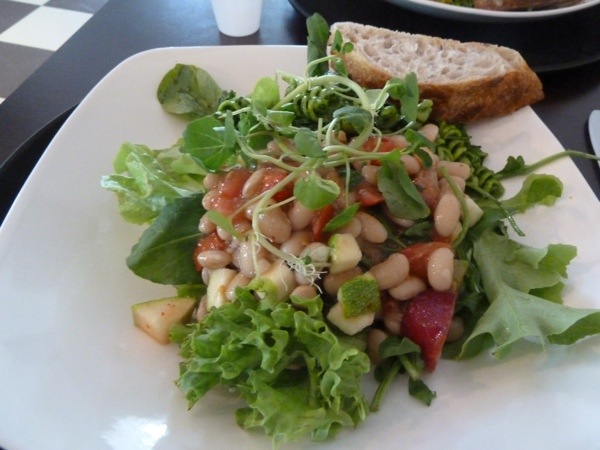 Ensaladas frescas! How many times have I been offered a salad in Chile, only to find it a) lacking in lettuce b) without protein and c) full of other things I don’t require in salad, such as corn? Salads are also what we call any vegetables served cold, where beet salad may be just beets, and the actual national salad of Chile being the simple (but delicious) wedge-cut tomatoes and thin slivers of onions, sprinkled with cilantro, and dressed with salt, lemon juice and olive oil. Delicious, yes, but filling, absolutely not.

Fear not the salads and Holm, run by bilingual (but neither one of those languages is Spanish, he is Danish and also speaks English) Holm, himself (and in fact, he even rang me up). Choose a salad (base of lettuce, some watercress, etc) plus as many ingredients as you want. This day’s ingredients were a brown rice salad, a squash and apple mix, a white bean and tomato mix, rotini with spinach and pesto (my favorite), as well as some other ingredient/toppings. There was also salmon, several kinds of meat (these are add-ons), and thirty or so types of juice, one of which they were giving out samples of today, and it was zucchini, celery, apple, ginger (if I am not mistaken), and is much better than it sounds.

The salads are good and hearty, though service is confusing and sometimes slow. Things were a little sweeter than we expected, though the salad was served with a crusty piece of bread (with good crumb! see below), and who doesn’t like that? Good food, feels and smells decidedly unchilean. I also happened to run into two of my other favorite bloggers in town this day at lunch, so not only is the food good, but the customers are (as my friend from Australia would say) ace. A hit.

Metissage, Vitacura 3187, Closest Metro Tobalaba (but you will have to walk the Perez-Zujovic traffic circle, so sign your will accordingly). Otherwise take the 502 or 405 bus. Get off at the Atton Hotel, which this bakery is sort of under. 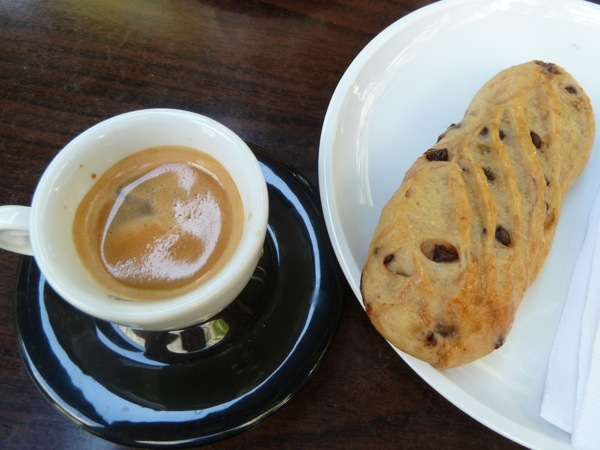 I had great expectations for Metissage. It’s in Vitacura, and it has so much adorableness. Chalkboard-written signs, very friendly staff, cutesy marmalades and giant brioche, and rustic breads that weigh a ton, and the butteriest croissants outside of a, well, stick of butter. They serve Lucaffé coffee, which is great, and they serve it well, understand how to make a macchiato, and didn’t wince when my friend ordered a double espresso with milk on the side, which they brought frothed. There is a pleasant little garden in the back.

So why a hiss?

The croissants are too buttery. Like they leave a film of butter in your mouth. The rustic bread had an awesome crust, but it was disproportionately hard to the wonderbread-like middle. It was the kind of bread that if you squeeze some of the crumb between your forefinger and thumb, it does not spring back at all. As it got stale it was better, and when it was toasted it was tasty, but fresh it was not to my taste (or texture).

I also was not crazy about the viennoise, a little chocolate chip-speckled bread, but that may be because I was comparing it to another café’s chocolate bread which to me is superior in every way. (that other café to be named soon, ok, fine, it’s Eric Kayser). Hit on the coffee, cute and service. Hiss on the pastries, which made me very sad. 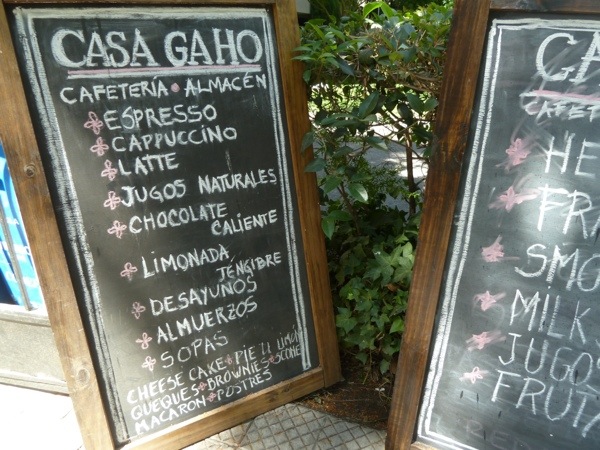 I was up in Providencia and had some time to kill. It was hot hot hot, and sunny, and I wanted caffeine. I’m trying to lay off the artificial sweeteners (looking at you, Diet Coke), so I stopped in at this café to order a coffee. Iced.

Here are the words I used to describe what I wanted (translated for your reading comfort).

Me: I would like a double espresso. I would also like a glass filled to the top with ice. Or, if the barista prefers, he can dump the coffee over the ice (imagine me making this motion with my hands one hand, pouring the espresso into the imaginary glass full of ice).

Her: You want a double espresso with ice in it?

Me: Yes, but in a tall glass. (I have gotten a coffee mug with ice in it before)

Her: What about a tall tapered glass? (imagine her hands making this shape)

Me: No, I said, no milk. And just coffee over ice.

Her: Do you want it mixed? (important, the word here she used was revuelto, which is worth pointing out, means “stirred.”)

Me: Whatever. I think it will mix itself. But no crushed ice.

The coffee arrived, some ten minutes later, blended. Which made it weak and frothy. Which was kind of ok, because they serve Vergnano coffee which has what is to me, a very unpleasant chocolatey roast.

I also got a small piece of carrot-poppyseed cake that tasted like a muffin in cake form. It was fine, but made me neither ooh, nor aah.

I will say though, that is is a pleasant enough place to sit outside, and inside they have a nice, airy space, and some kids’ furniture, and there was a scandalously-priced small vegetable stand outside as well. I didn’t hate it here, but I would not get coffee again. The lunch of the men sitting beside me looked tasty, and another couple’s dog kept coming over to be petted, but I cannot promise that any of this will happen when you are there.