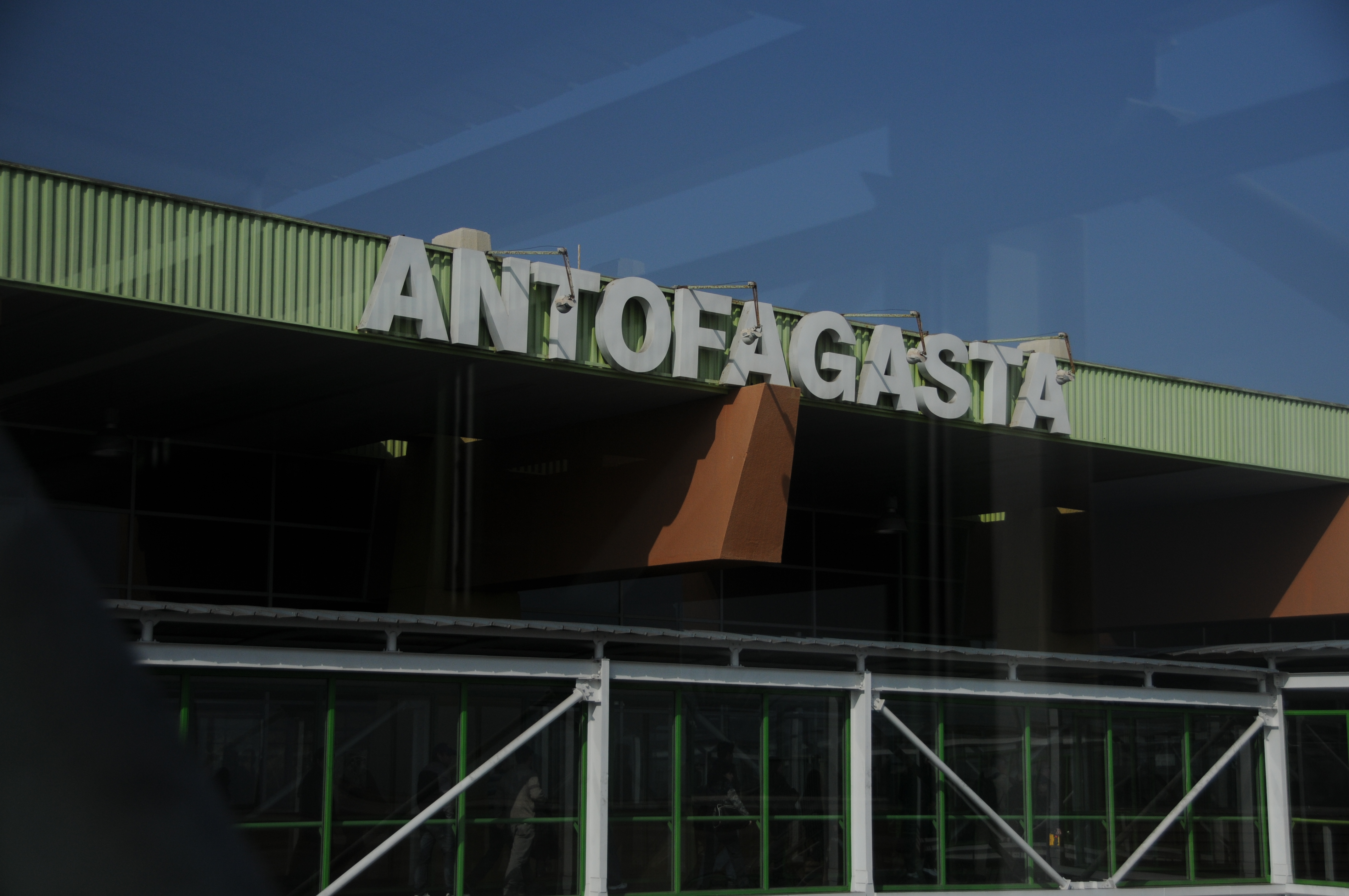 Antofagasta, in the north of Chile, doesn’t get a whole lot of tourism, unlike some of the other way-north cities. Arica is the first city you get to coming in overland from Peru, and it’s breezy and warm, has a giant hill you can climb, beachside vendors selling mango and orange juice and a little pedestrian street for wandering.

Next comes Iquique, which has a certain surfer following, a beachside path you can bike on, a good skate park, and the adorable street called Baquedano, with the old saltpeter headquarter buildings, and the world’s slowest-moving tram that runs along it. It was also hot and sunny and strangely stultifying (beach humidity held in by hills), has a giant open-air duty-free mall at which I had an ice cream and bought nothing, because the prices on camera gear (what I was looking for) weren’t so great. But the water was warm, and I stayed at a hostel, where one of my hostel mates made the mistake of walking alone on Playa Cavancha at night, and if there is one thing I have to say about that, let it be, don’t.

And moving further south, the logical stopping point might seem to be Antofa (an TOE fa), except that sneaky pete Calama gets in the way (though further inland), and from here there is access to San Pedro de Atacama, and wham, you lost the tourist to four days of high altitudes and geysers and salt lakes and flamingoes and hotsprings and sandboarding and where-oh-where-has-all-my-money-gone, at which point they either take a four day trip through the Salar de Uyuni and SW Bolivia up to Uyuni, or head overland to Salta (Argentina), or they head back out to the coast, hitting Bahía Blanca or La Serena.

But they don’t hit Antofagasta. Boo.

When you tell Chileans you are going to Antofagasta, they usually say, “why?” and “it’s very expensive.” What they don’t tell you, because most of the people giving this advice have never actually been there, is that lodging is very hard to come by, and that walking around downtown at night, you will likely surprise some drug transactions in progress (or am I just the lucky one?), but that during the day, it has many lovely architectural features, and people who are pleasant enough, but can’t quite figure out why you’re visiting, and will occasionally ask. There are loads of foreigners from other places in Latin America, most notably Ecuador and Peru, and way more people of African decent (these being from Ecuador and Peru, it seemed) than you’d see in Santiago. The city mainly exists due to its proximity to a lot of important copper mines, as far as I can tell, and you often see heavy-duty pickup trucks with those bent-over sproingy flag masts in the back of the truck.

Here’s a little of what I saw in the not-so-big city. 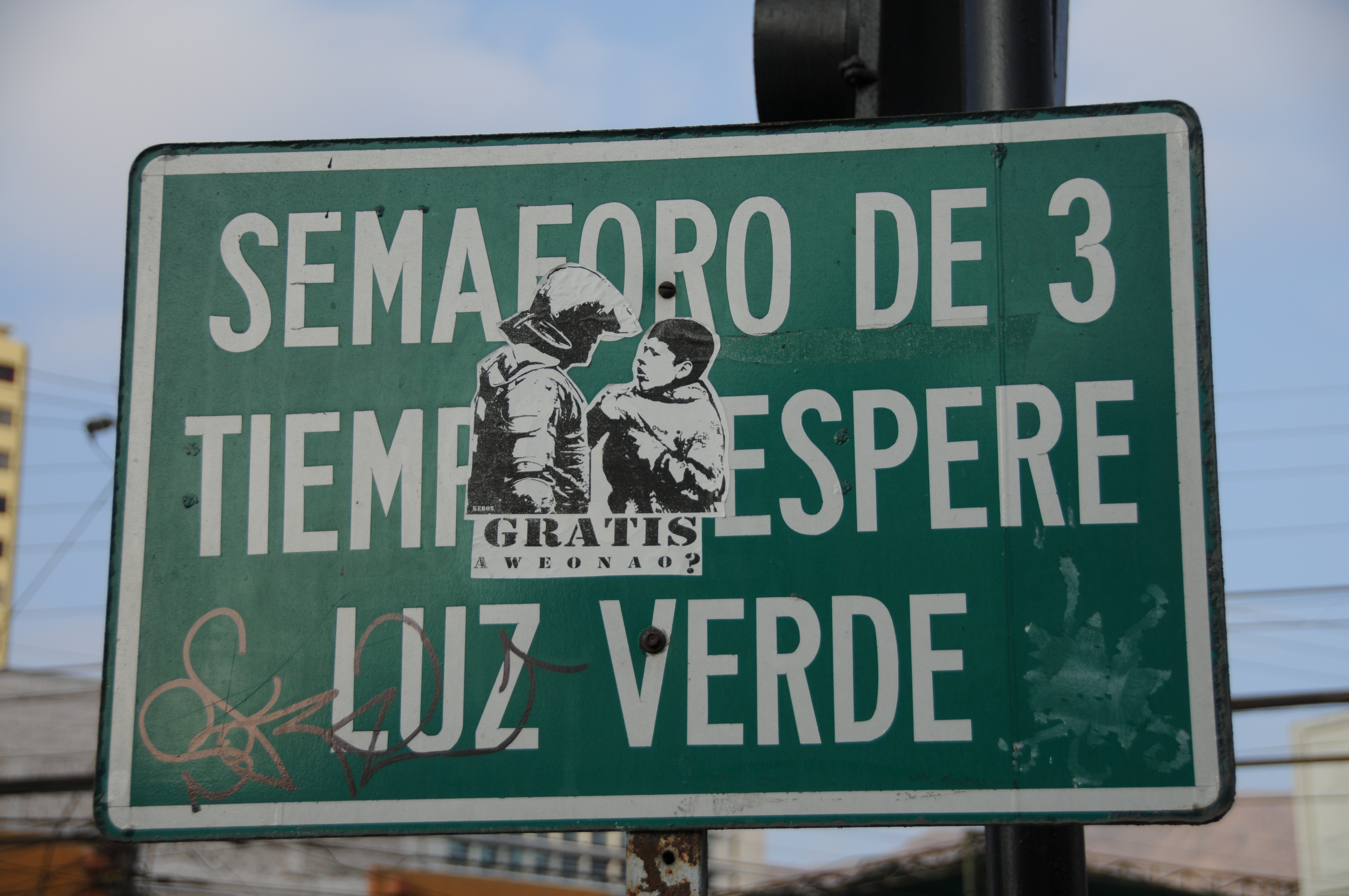 There’s houses in them thar hills. Or perhaps you could say it’s upward urban sprawl. It’s pretty to look at from down below. 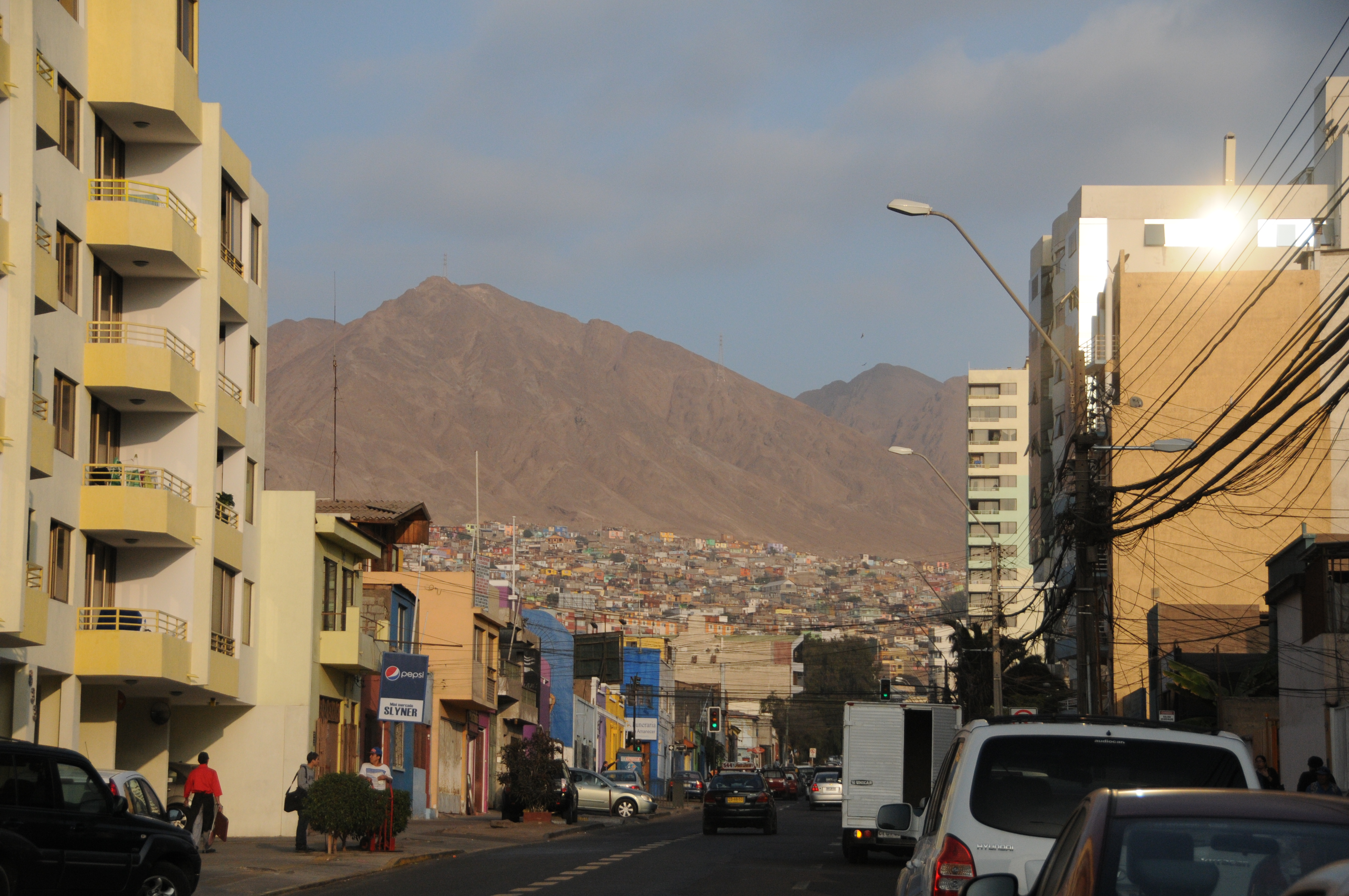 Possibly the loveliest ever sign saying which pharmacy has night hours on which day. This is called “farmacia de turno” and if you get to your pharmacy and it is closed, in Chile there will generally be a sign telling you what nearby pharmacy is open. In Santiago it’s usually handwritten on a piece of A4 paper. See how pretty? The numbers are the days of the month. 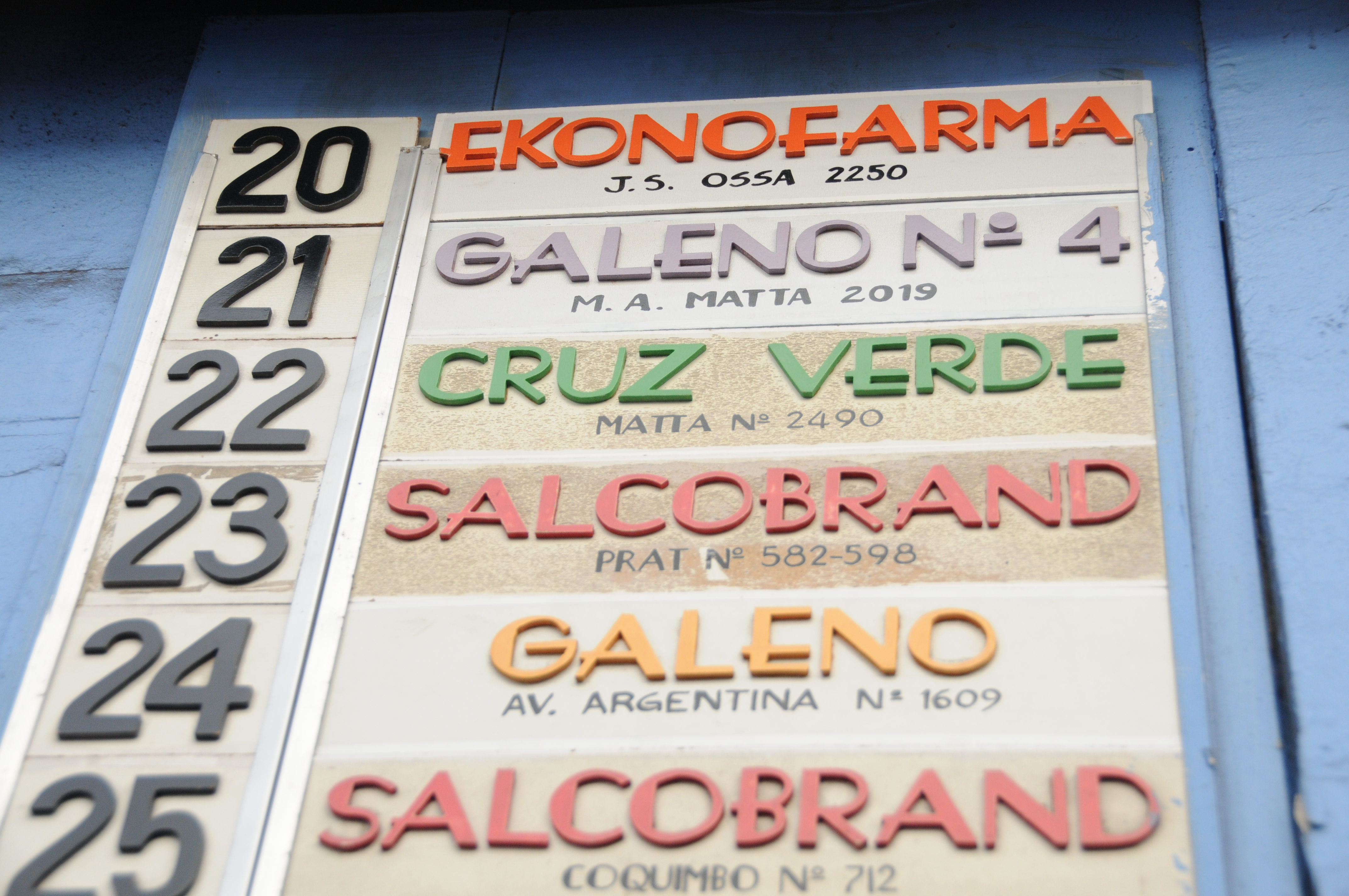 Northern influence in the market, with the chaywa, which I also took pics of at the market in Arequipa under a different spelling. They’re mild and crunchy, and this sign alleges that they lower high blood pressure and cholesterol, as well as helping to burn fat. Step over, goji berries! 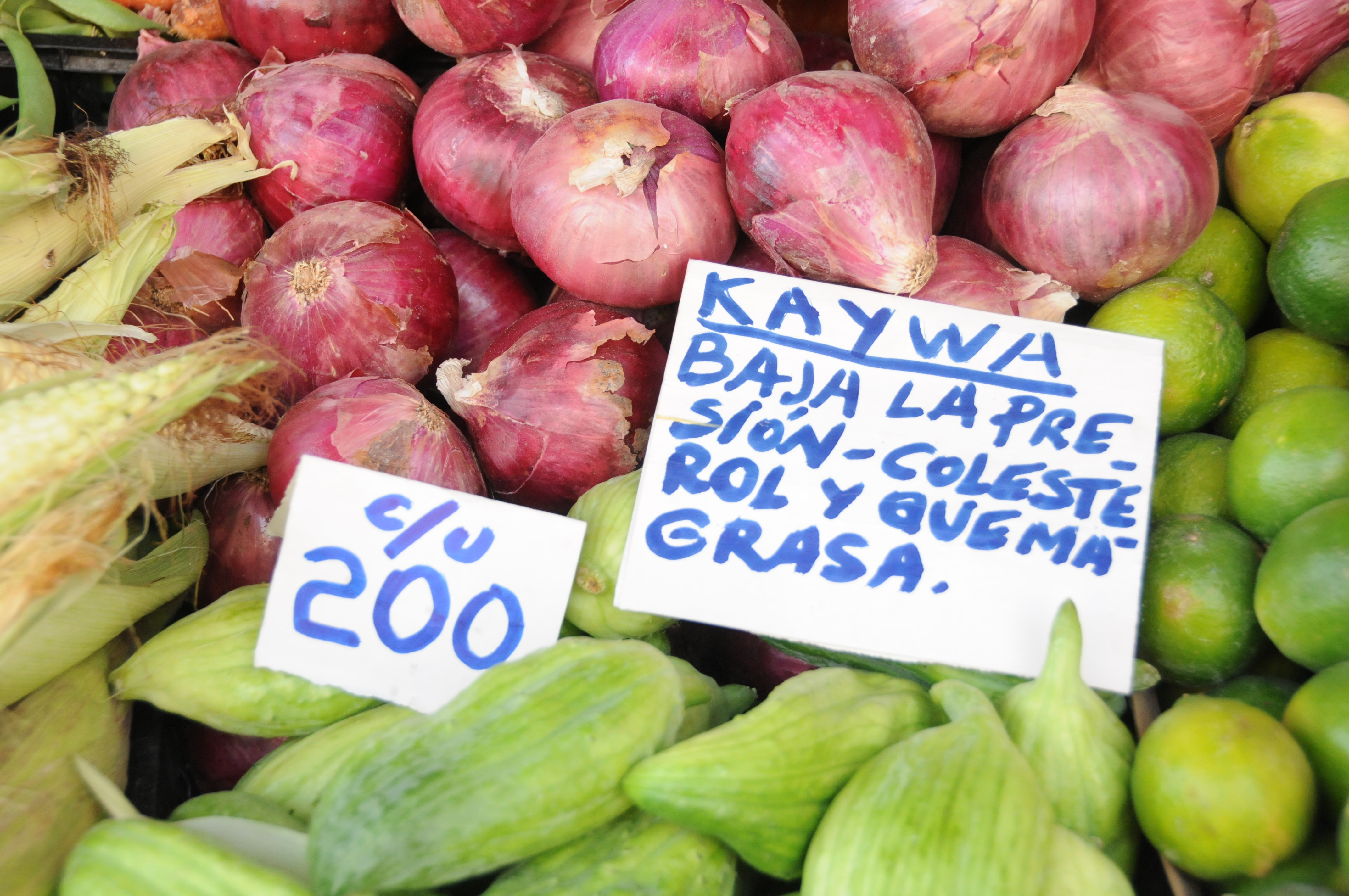 There is so much going on in this scene, I don’t even know what to say. Guy walking horses, Moorish building, pedestrian walkway, barking dog, lots of electrical lines, pharmacy on the first floor of the building. 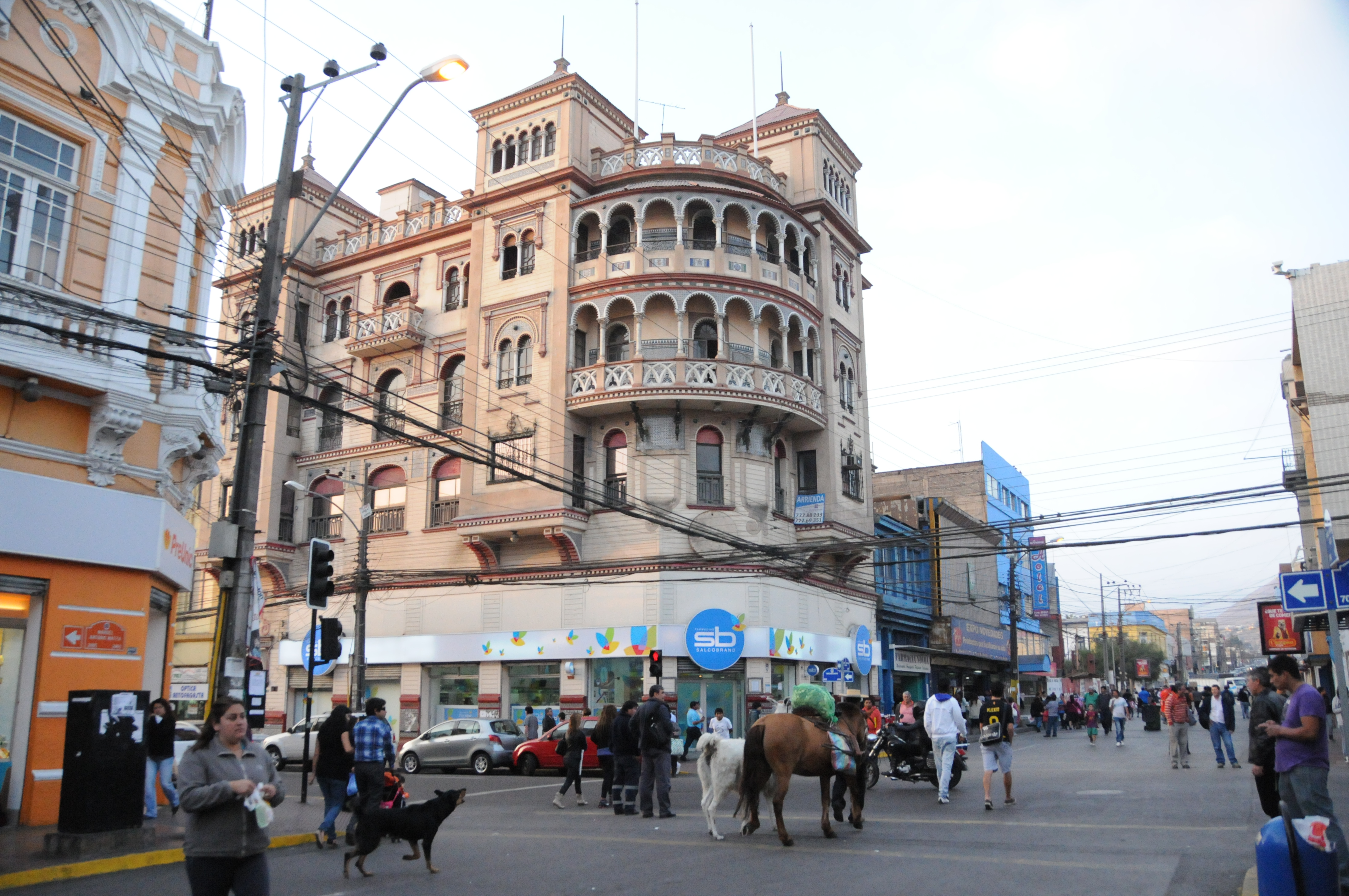 More Moorish building. The north saw a lot of immigration from the Middle East. 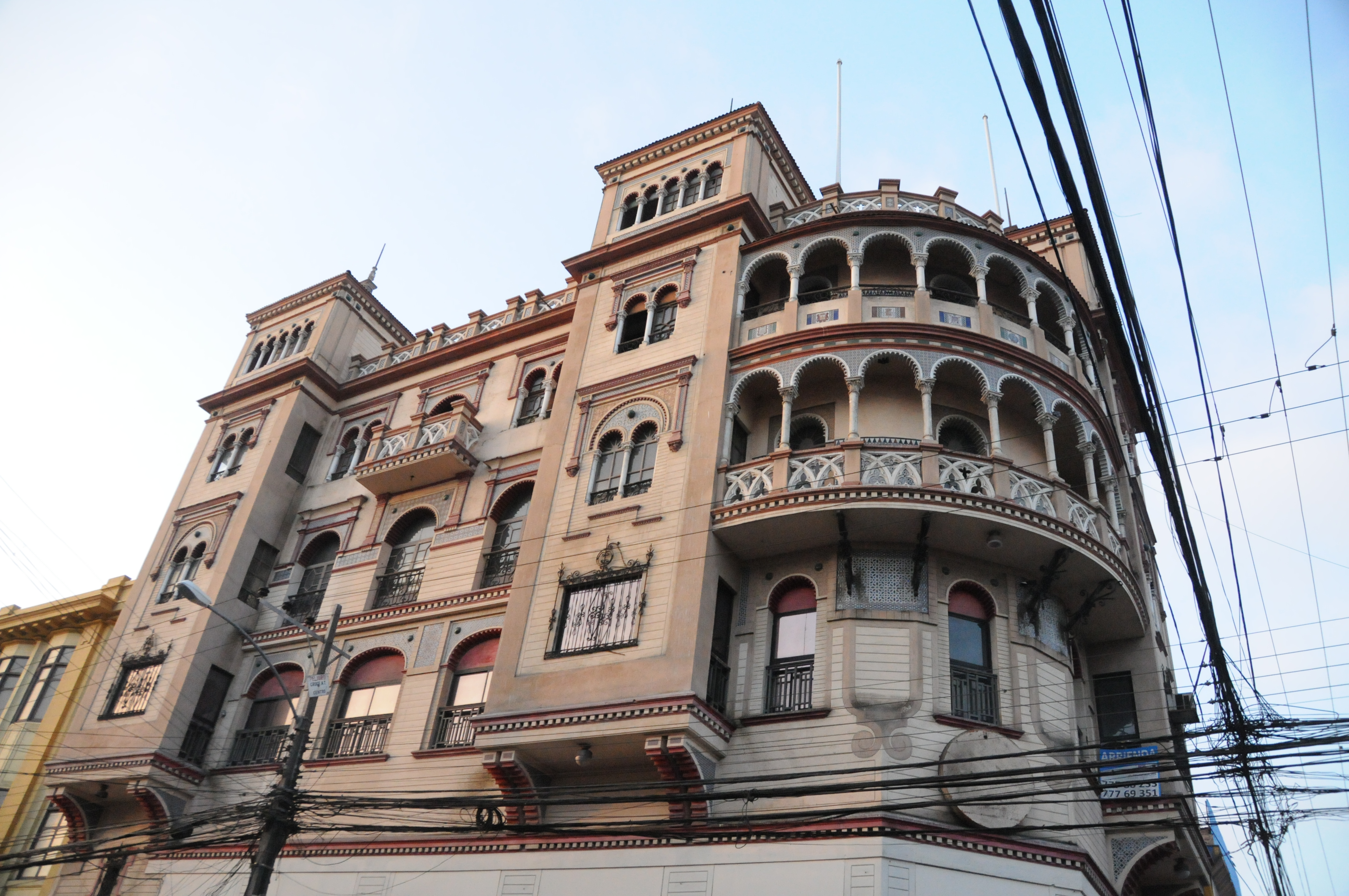 Closer view of the beautiful tiles, which remind me of the Alhambra in Grenada, Spain. 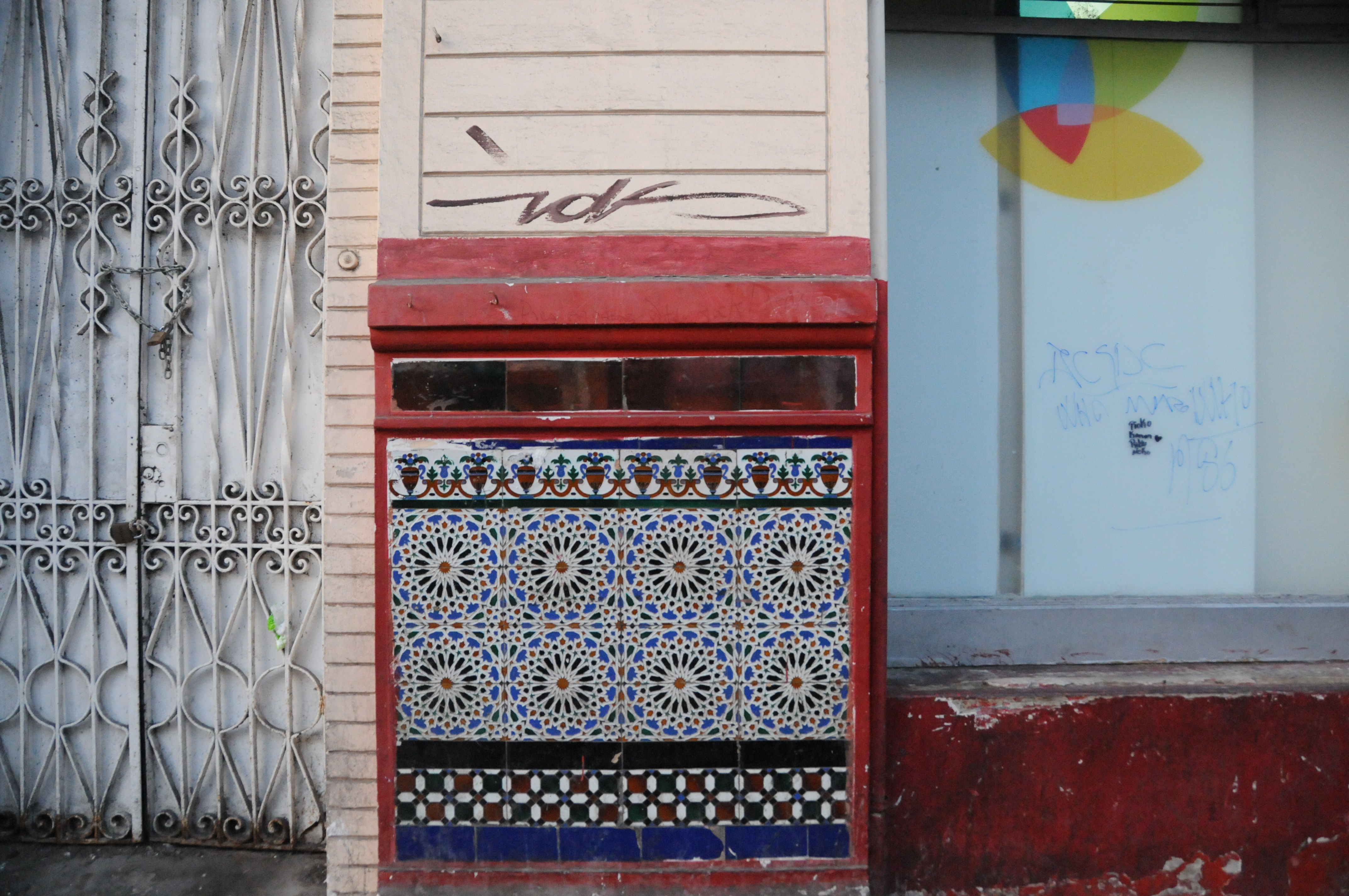 Holy architecture disrespect. This one is, as we would say in Spanish “notorio.” You do the math. 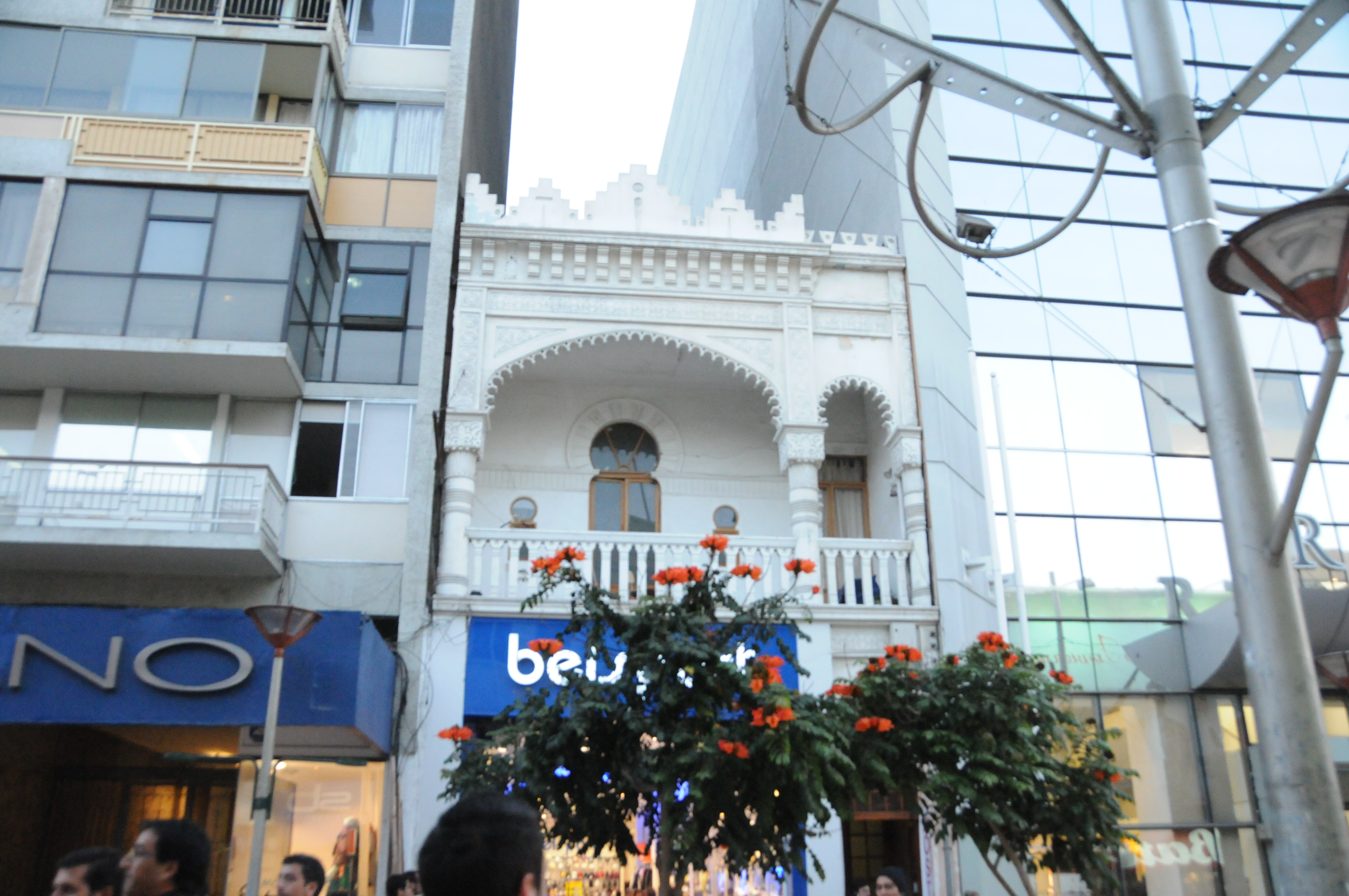 In Spanish, the noun for the person from a place (got that?) is called the gentilicio, So I’m a New Yorker, and people from Antofagasta are Antofagastinos. Rolls right off the tongue, no? 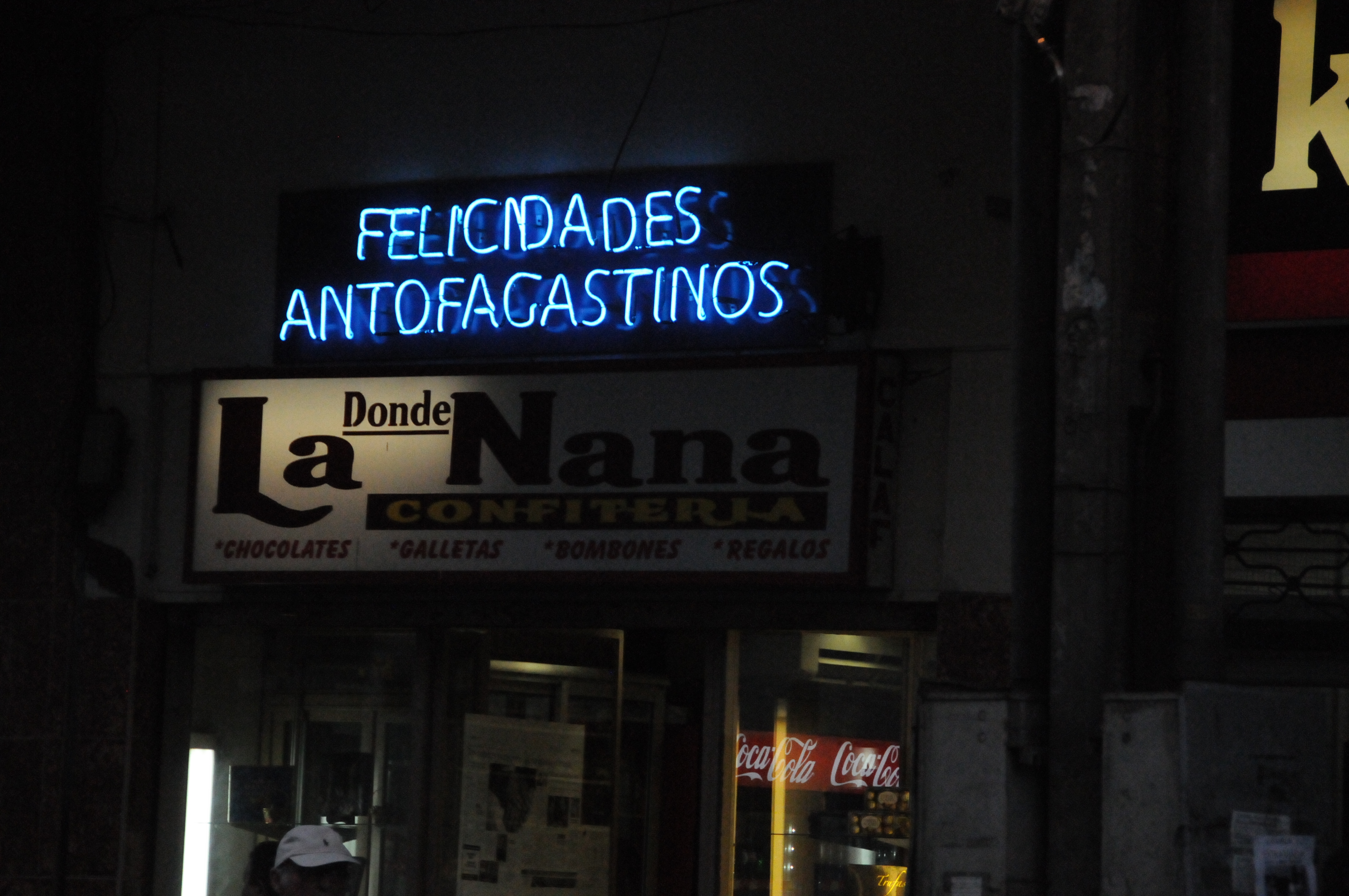 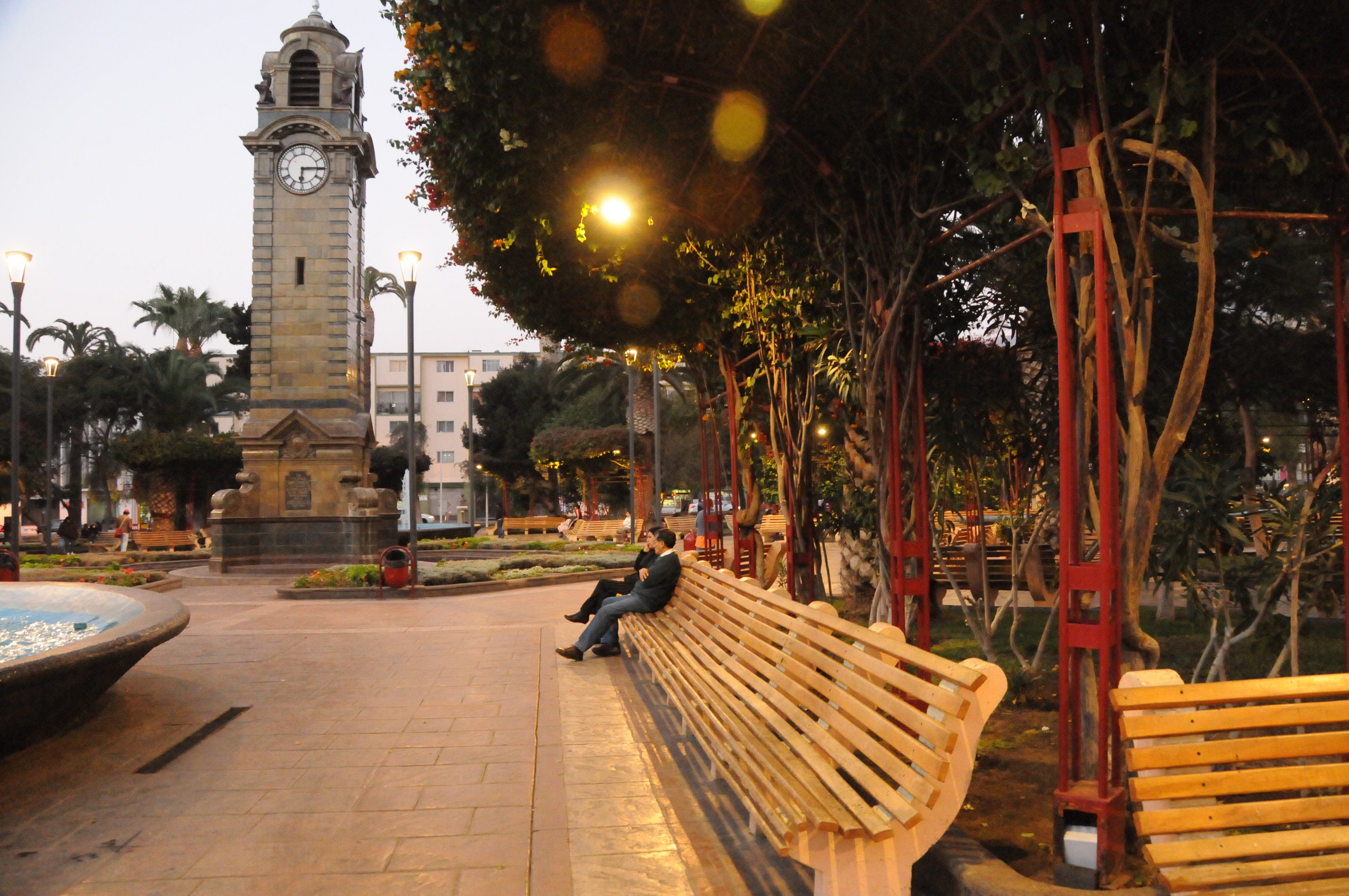 Nighttime at the market. 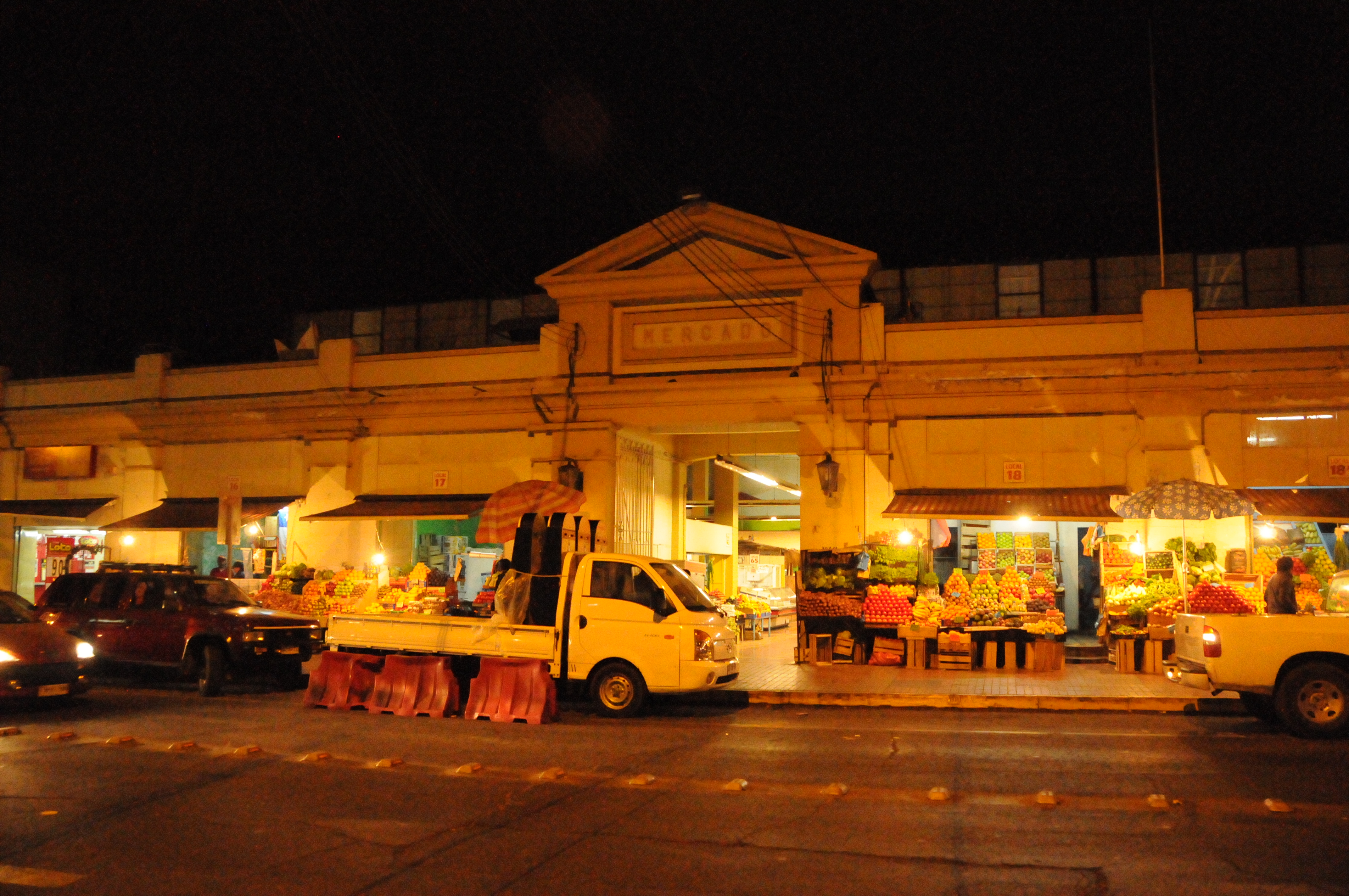 There seemed to be a disproportionate number of stores specializing in goat cheese, which were open until strangely late. 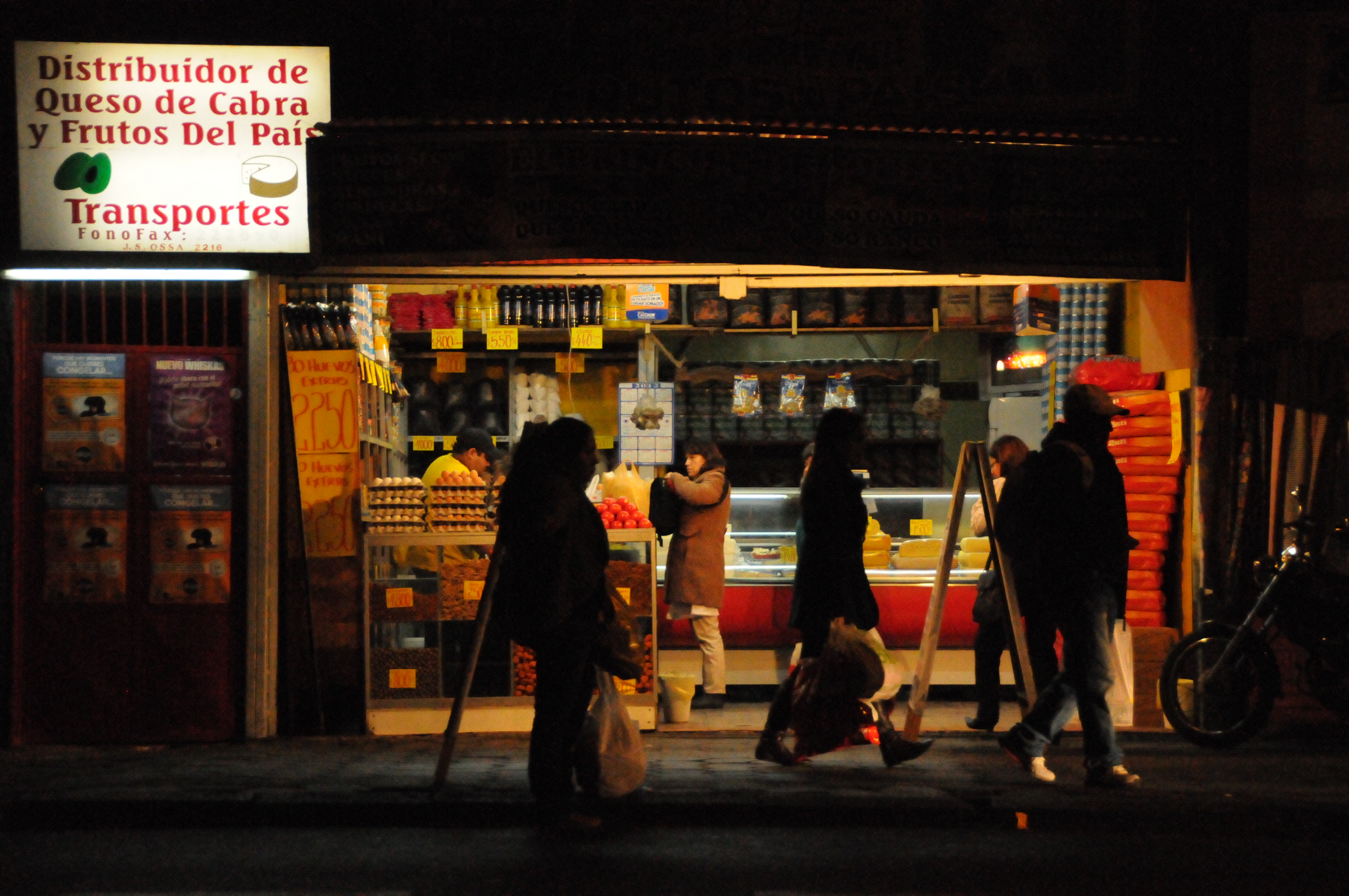 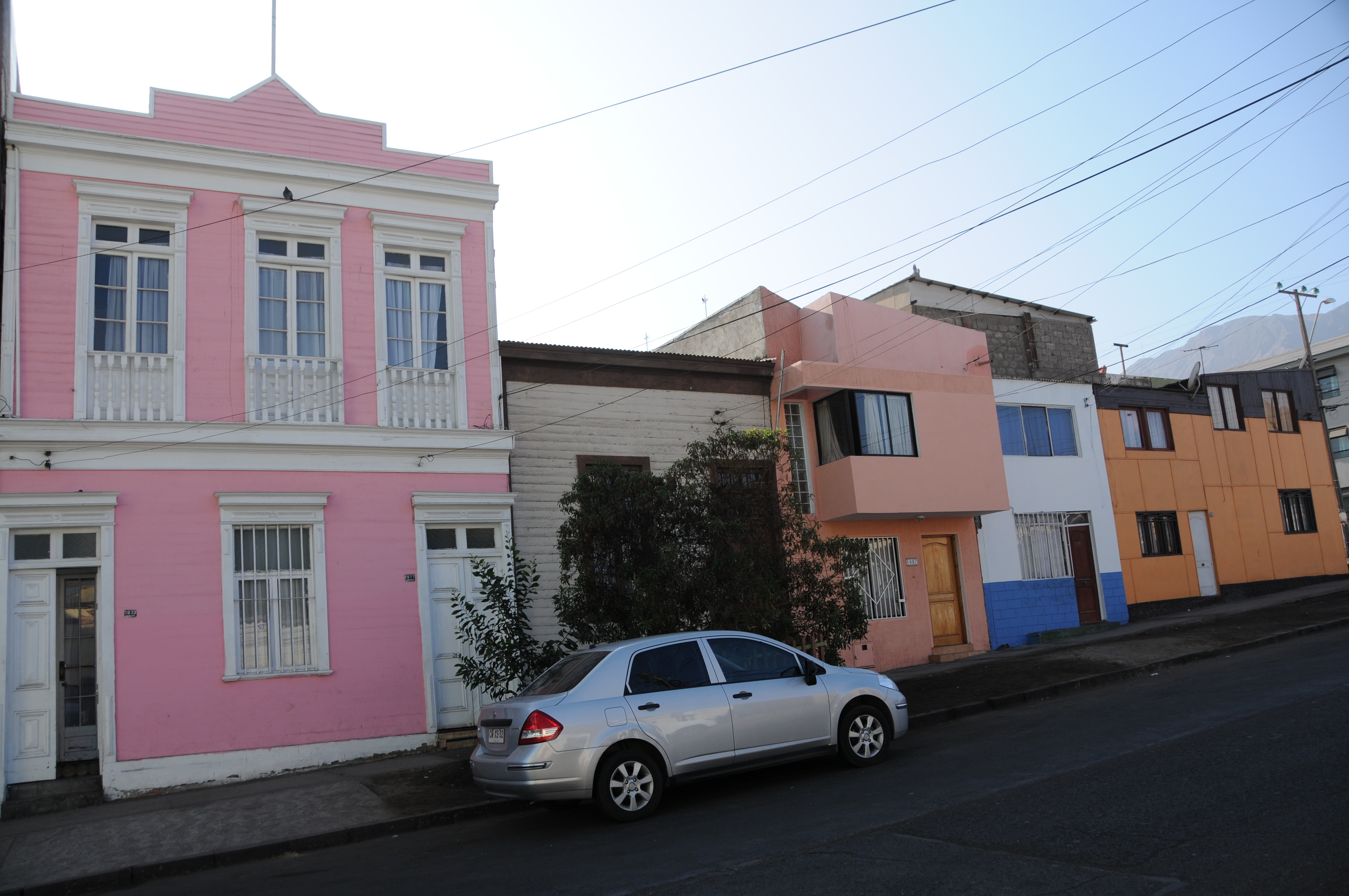 This church caught my eye. It’s also one of the places I surprised a drug deal at night (across the street). Or maybe I should say a little open air drug market surprised me. Consider yourself warned. 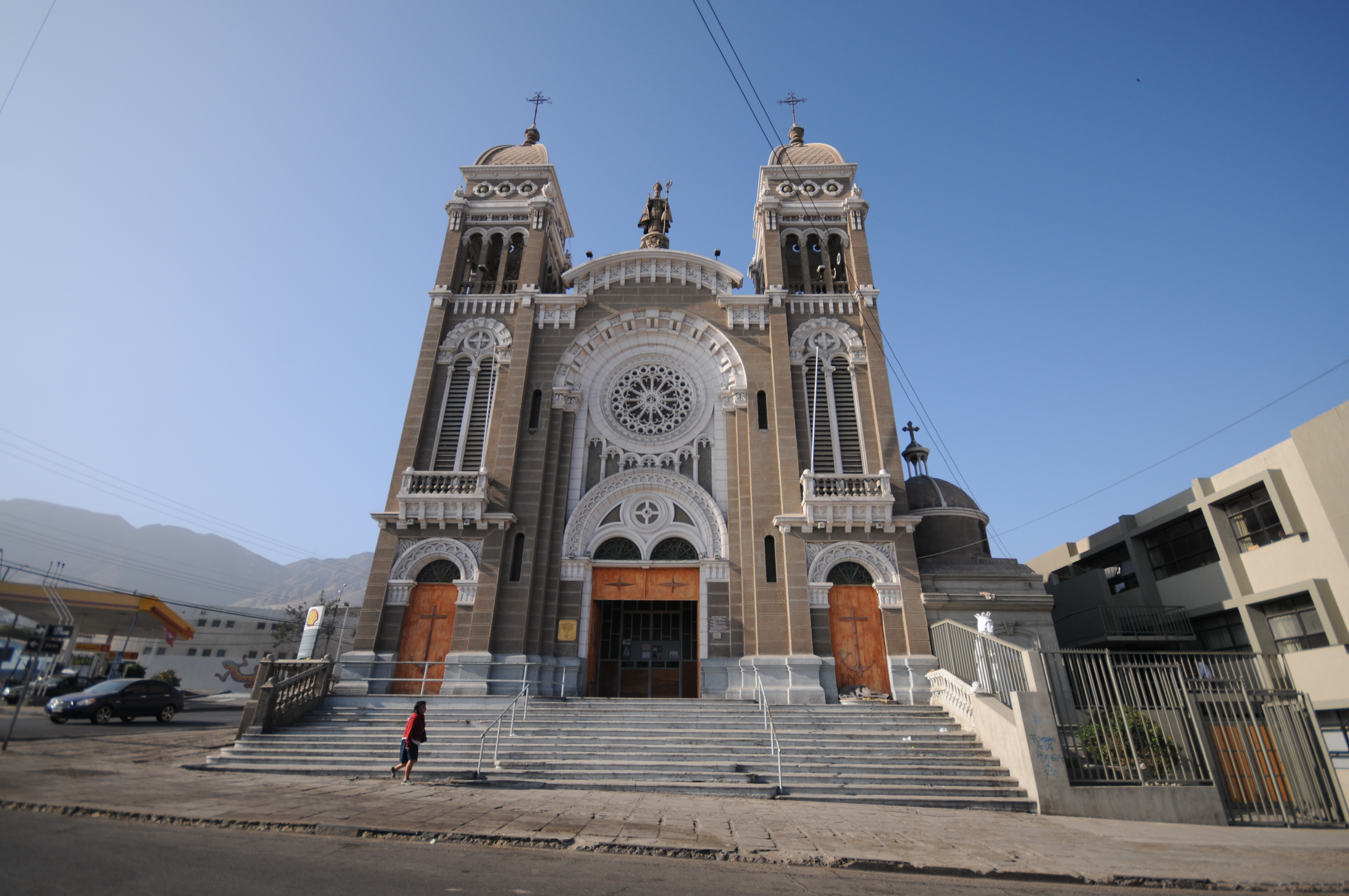 Alot going on here, too. Not quite sure what to say. 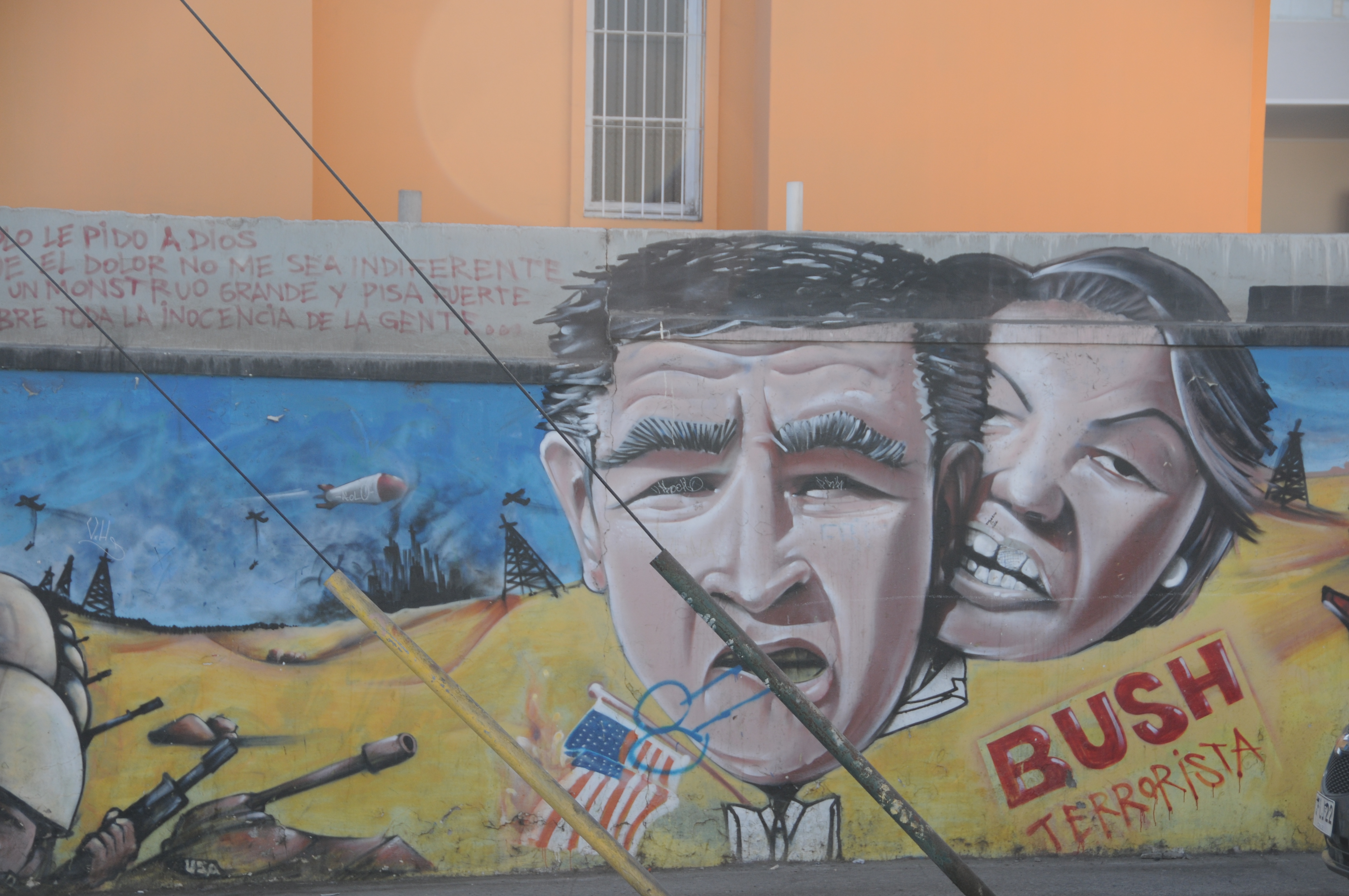 Mural on a building down near the water, harkening back to the saltpeter era, looks like. 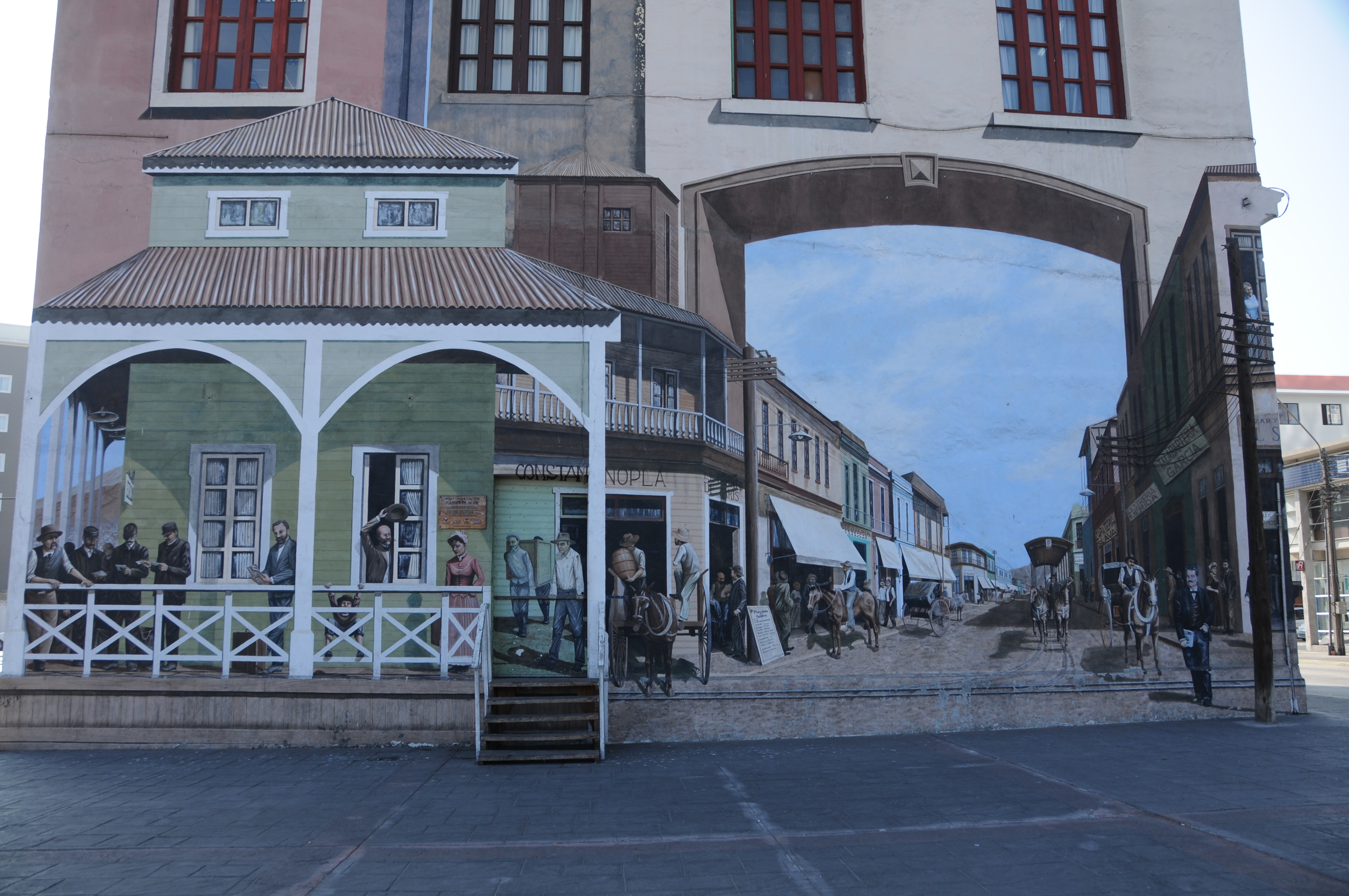 And then I went to hills great and small and looked at lots of stars, and sleepy astronomers, but that is a story for another time.