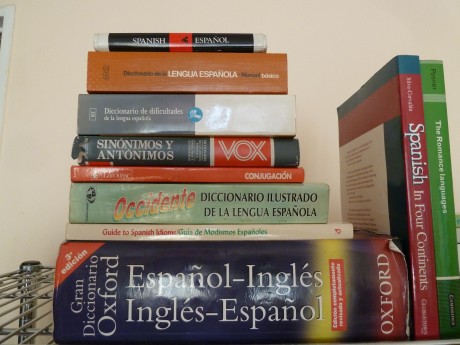 This second one, which is a non-literal translation, or equivalent of the second, actually means “in the house of the blacksmith, there’s a wooden knife,” which really, who wants an iron knife anyway, but between an iron one and a wooden one, it does seem the iron one would work better.

But this isn’t really about people not having what you’d expect them to, it’s more about people (me) having exactly what you’d expect them to. And that thing is dictionaries. And resource books. And do I ever.
I mentioned to a friend this weekend that I’d picked up a new Chilean slang dictionary and that I was really excited about it, so I thought I’d do a quick explanation of what’s in my arsenal and why.

About Spanish in general (pictured above)

Granddaddy of Spanish-English dictionaries. Big, heavy, and I love it. Pretty reliable, but user beware, of course.

Probably helpful if you live someplace that’s not here. I don’t see any of these idioms reflected in Chilean Spanish, but hey, still useful for pan-American (and European, etc) Spanish.

This dictionary, which I picked up at the persa (flea market) makes me laugh and laugh. An ex and I used to make each other guess what the pictures were illustrating. It was almost impossible. Bad illustrations. Cheap dictionary.

When you’re first learning Spanish, it’s impossible to remember the various patterns the different verbs follow re: conjugation (mainly, stem-formation), like how caber (to fit) becomes quepo (I fit) in the first person. Helpful book similar to 501 Spanish Verbs, which I thought I had, but I don’t. I haven’t looked at this one in a while.

I bought this in Spain at a time when I thought that if I read the dictionary (or the thesaurus), my vocabulary would improve. I think the main thing that makes my vocabulary improve is actually talking to people, preferably people who use different words than the ones I normally do. Still, handy for writing in Spanish.

This is kind of like Fowler’s Modern English usage. It talks about ways in which words are misused, and how they should be used. I should take more time to look at it, but judging by how pristine its condition is, I haven’t done much of that.

I don’t know where this one came from. I assume someone gave it to me. Thanks, someone. I am not sure I have used it much, nor what distinguishes it from the others, though it doesn’t have the ridiculous drawings of the light green one, pictured above.

This is the first Spanish-English dictionary I ever had, and I carried it around in my daypack in Central America, and then brought it to Ecuador, and I remember the first time I ever went on a weekend trip without it. It was like taking off my language training wheels.

Language geek book about how language contact changes language, specifically Spanish. We see some of this in Chile, and I saw (or noticed) more of it in Ecuador, but in both cases, Quechua has had a big influence.

This talks about the relationships between the languages, and I find it fascinating, as I am always looking for patterns, and dreaming of being fluent in all of the Romance languages, though I might need a bigger bookshelf, in addition to a bigger brain. 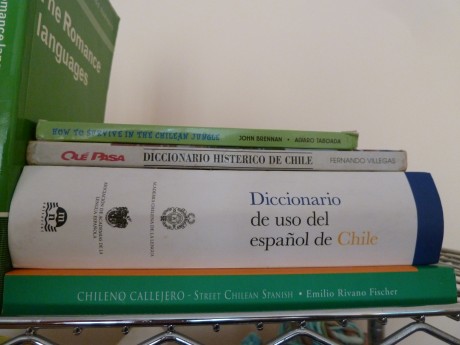 This book, by the Univ. of Concepción is my newest addition. It seems pretty up-to-date, but doesn’t have any revés in it (like pig latin, in Spanish), or at least not any of the words I commonly hear. Maybe it’s just missing coa (slang originating in “canadá” (itself slang for the cana, which is jail). It explains each term in Spanish, so probably best for those who already speak good Spanish. Also, the dictionary is fairly small, it has lots of other little “lessons” in there. I got this at the feria de las pulgas (flea market) at Plaza Mulato Gil (Lastarria).

This explains how Spanish is used in Chile, including one of my favorites “arrastrar la bolsa del pan,” which refers to when you’re so young that the bread bag (formerly of cloth, and quite large/long) dragged on the ground. It has more entries than the street version (callejero) above), and gives citations to media sources.

This book I picked up at the feria libre (another and the final expression for a fleamarket) in Valparaíso, and to date, it’s my best find there. It’s basically a book of in-group jokes, basically explaining the subtext behind what someone says when they say it. So for example, the “encargo,” which means “to put in charge of,” we most often use to mean something we ask someone to do for us or bring back for us. Francisco Villegas, in great, and hilarious detail talks about what it means to him. He says:

Atestigua los muchos resabios provincianos de Chile el que nadie pueda viajar al extranjero sin que lo jodan de encargos.
(Living proof that no one can travel outside of Chile without being weighed down by requests to bring back this or that.)

How to Survive in the Chilean Jungle

This one is considered the early bible for Chilean slang. I used it to watch the movie Taxi Para Tres when I first came to Chile, and it helped me to understand that camote, in addition to being both sweet potato and a sickly sweet candy-type-thing, can also mean “trouble.” It’s handy, and to date, the only slang dictionary I know that gives definitions in English. It also warns you against using certain expressions in mixed company. It’s not something I’d use to proactively develop your vocabulary, so much as something to use to decipher what’s been said to you.

And there you have it, my Spanish-specific and Chile-specific language arsenals. Plus many, many websites. Whatcha got?