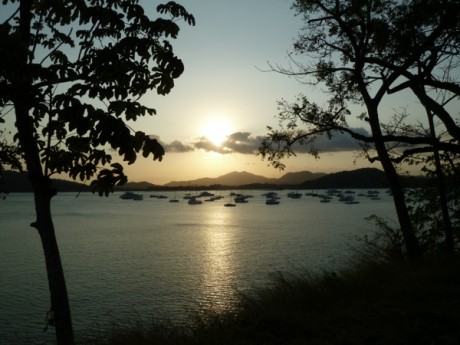 We in the Smith family have a long history of travel snafus. It seems that it’s often hard for us to coordinate, when there’s more than one person involved. And even when there’s only one person, or one group of people, odd happenings well, happen. And then it all works out in the end and we have a good laugh about it and recall the other similar events.

To prepare for a conversation I am sure to have with my mother tonight, at 11 PM, when she finally gets here, a full six hours later than expected, where here is Panama city, and mother=tired, I thought I might prepare a list.

The great Danbury, CT bus terminal miscommunication. I went to college in MA, and my sister in NY. In this case, CT was closeish to her, and not far for me to get to. I was off to visit her, and started my visit with a several-hours long wait in Danbury CT, across the street from the Dunkin Donuts, where the Peter Pan bus dropped me off, while my sister did laps in the Greyhound bus terminal. We eventually met up, and I eventually regained feeling in my extremities. It was about 20 degrees out, and in college I almost always wore skirts, and often steel-toed shoes (don’t judge, or at least do so silently).

The fabulous Cartagena discombobulation. My then 5-months pregnant sister and six-year-old niece and I were to meet in Bogotá, Colombia, to fly the rest of the way to Cartagena together. But when I got there, her plane had been delayed, and they couldn’t tell me what plane she was on. There was very, very much confusion and consternation, and finally they told me that I had to get on my plane because they wouldn’t guarantee me any other seat. Later these same people told me that my niece (remember? six?) had gotten on the plane, but my sister had not. Seemed quite unlikely. In the end, we met up at the airport, after me spending several sweaty hours jumping up with every plane that got in. The whole airport was in on the pregnant-sister-small-beglassesed-girl-with-blonde-curls. It was quite a sport.

The truly awful Costa Rica meningal cancellation. This story is hard to tell, and if you know me, you’ve heard the full version. I spent five days riding around the Nicoya peninsula before meeting up with my family in Tamarindo, Costa Rica. The day before we were supposed to meet, I got an email telling me that the trip was cancelled, and my less than one-year-old nephew was in the hospital with bacterial meningitis. The punchline of this story is that we always refer to his two-week hospital stay (and he seems to be fine now) as “when we went to Costa Rica.” One day, about three years ago, my niece looked at me and said, “Aunt Eileen, you know we didn’t actually go to Costa Rica, right?” And my sister said, “actually, Aunt Eileen did.” And my niece said, “She did?” Indeed, I did.

The great Dominican taxi hijacking. This one didn’t involve me, and so maybe it’s not my story to tell, but in short, there is a pink-shirted taxi cartel of sorts in the DR, and my sister’s family and my mother were riding in the other taxi company’s car, and their car was nearly t-boned by the pink shirts and forced to switch taxis. I think. I wasn’t there, but surely this is part of the Smith family travel juju situation. Where I hope juju is not an offensive term.

The spectacular Seattle ice storm delay and great grumpage. Short story: Visiting Pam, got iced in. Supposed to get to SF one day, arrive 1.5 days late, thereby missing valuable family togetherness time. Much bitterness, also unseasonable and unpredictable weather pattern. At least when I booked my ticket. Pam handled my presence and freaked-outedness with aplomb, of course.

All of this is why when I got my mother’s email this morning telling me she’d be six hours later than she was supposed to be here to meet me in Panama City, for a five-day trip, I thought: of course.

And yes, I know we’re very lucky to be able to visit each other and go awesome places like Danbury, Connecticut, and if we stayed home, we wouldn’t have these kind of transportation issues, though there was that time in the 80s that my mother locked her keys in the car and my sister couldn’t come to rescue us with another set of keys because she’d just been juggling some knives (so to speak) in the kitchen, and the knives won. So maybe we should just stay home.

I am so kidding. And if I could keep going after this, clearly nothing is going to stop me. But I really hope my mother gets here, soon.

Photo taken this evening on the Amado Causeway, created with the fill dirt from the Panama Canal construction. Sunset by mother nature.