Legit Thai food in Santiago? you bet. Cheap? That, too! 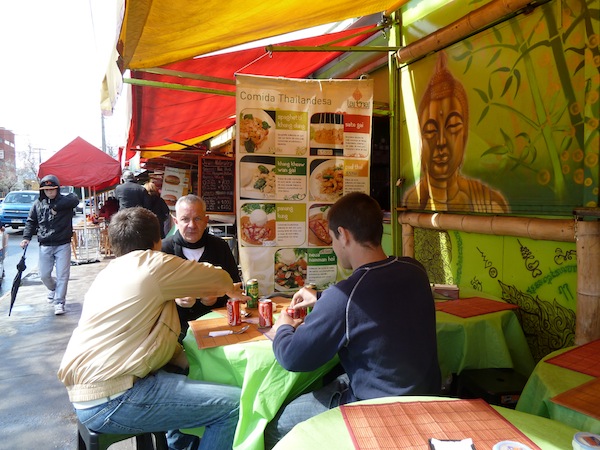 Short story: Go to Lai Thai in BioBio, spend 4 lukas, come out with your tastebuds happy. Thank me later. Franklin 602, near San Isidro.

We citizens of the world, we people who have lived here and there, or even just here, or only just there, have some maxims about food. They goes like this:

Paying a small amount of money for just “meh” food doesn’t bug me.

Paying a lot of money for food that’s really great is ok, for special occasions.

Paying a lot of money for food that is just “meh” is unacceptable.

Paying a small amount of money for really great food is… practically impossible.

Well hold on Maxim D lovers, because if you haven’t been to Lai Thai yet in Bio Bio (or either of their other locations on Luis Thayer Ojeda or Irrarazaval near Salvador), you have not yet begun to explore Maxim D in Santiago.

The first time I went, I was waiting for the rest of my group to arrive, when I spied a Brit chowing down and asked him what he thought. “Just like in Bangkok,” he said. I’ve never been to Bangkok, but I usd to live in San Francisco, and like to think I know a thing or two about what good Thai food tastes like. So far I’ve tried a shrimp in coconut milk and peanut sauce that they say is spicy, but it is not (thought it is too salty), and a pad thai that rivaled Raku’s kway teow in Dupont Circle, Washington, DC. It’s that good. I got it without the chicken, no problem.

This snack bar style restaurant is in a totally unlikely place, in the warren of galpones (hangars) and street stands of hundreds of different sellers with everythign from books to seashells to even the hose you use to connect your stove to the gas jet (yes, I bought this once here, no, it did not blow up). The place itself is just a food stall/stand in a long line of traditional Chilean eateries with giant chunks of meat sizzling on the grill. It’s very informal, you pay as you ask for your food (but after getting a table), and clear your plates at the end of the meal. Don’t blink because it’s that easy to lose your table, as there are often ten or so people waiting to sit. And why? It’s all about maxim D. They have seven dishes, none more than 4,500 pesos (less than 10 bucks at today’s rates), and all of them pleasers.

Like I said, thank me later! And thanks, Lai Thai, for making great Thai food affordable in Santiago! Fwiw, I also like Thai House in Manuel Montt, and Ky, and for a quick, cheap central lunch, Sawasdee, but Lai Thai for cheap, filling, tasty eats with a more limited menu. Soups and pickled papaya salad, it’s Thai House all the way.

Where have you eaten lately?