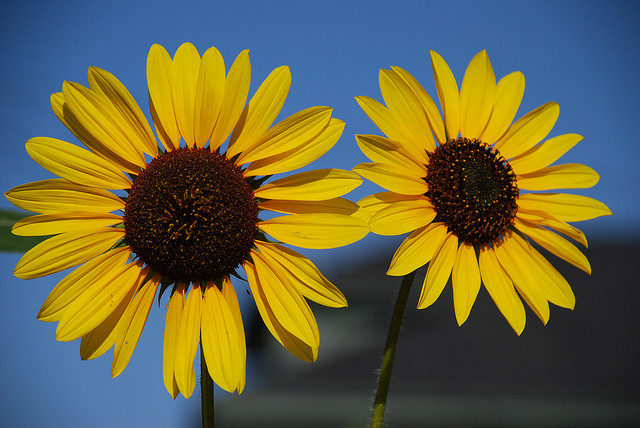 It’s funny that before I even left the house today I’d perused some pictures and decided that I wanted to write about this one. What’s to write about? I was in Portland, OR, a couple of years ago, a place where I used to have a home (or a few), and a life, and where now I wander around wondering if I’m going to run into someone I know and what that will be like. I was walking down Hawthorne, not far from the Baghdad, where I used to watch movies and eat over-topped slices of pizza, and I saw these sunflowers, and I had to stop and snap them.

So then how funny that I realized that yesterday Annje and I were “girasoles” (the word for sunflower in Spanish, which means “turns to the sun”) yesterday in her backyard as we tried to squeeze a summer day out of the middle of winter, tilting this way and that, straining up to the sun while her kids ran around, swung, jumped off things and did their homework in the backyard.

And then there was my unexpected trip to the Vega today, where I tooled around the back section where the cooperativa agrícola sign flies, and stopped to talk to one of my favorite vendors, whose overhead sign says “xuxa me pasé” which means roughly “damn, I outdid myself.” I was curious to know when okra comes into season, since it seems I always miss it. Almost no one eats it, and you have to go to the middle eastern section and ask for it, if you want it, because most people don’t even know what it is.

“Past September,” he said, and then recommended I go check with the other sometimes-bamia-bringer the next stand over. But I didn’t, because I got distracted by the topinambour, or sunchokes/jerusalem artichokes, and decided to pick up some of those. They’re related to sunflowers, and so there’s your double plus connection with the girasoles pictured above.

And the triple hit? Today on my way home from coffee with Stephanie, it was raining a frigid, insistent rain that filthied my pants and dampened my lower back, despite judicious application of raincoat. Which has nothing to do with sunflowers, but has nearly everything to do with many of my memories of Portland.

So which came first, the picture or the memories/experiences?

(also, if you came earlier and saw a very unbearshapedspherian post about alfresco dining here, that was for somewhere else, and it’s all fixed now.)