We’ve got that. Or maybe we don’t. Adventures in linguistic and culinary Chile

Where our protagonist goes to the supermarket with one idea for birthday cupcake decoration and comes out surprisingly Chilenized.

I had my first Chilean linguistic/cultural confusion in a long time a few weeks ago. In keeping with what a fabulous time my niece and I had had making and decorating cupcakes for the family when I was in San Francisco, I volunteered to make “quequitos” for a friend’s birthday. Quequitos, the diminutive of queque, are how we refer to cupcakes. It’s not that cupcakes are part of the Chilean diet, but there are small, tough cakes cooked in a muffin tin that people sell on the street (yay, more street food), so they’re not totally alien, either. I’ve had good experiences in the past making various baked goods for Chilean friends, including all manner of crisps, crumbles, cobblers, carrot cake and chocolate pound cake. So I had every reason to think the cupcakes would be a success.

So I went out to the baking supply store on Puente (the one that says Ambrosoli on it, but that can’t be what it’s called, because that’s a brand of (mediocre) chocolate), and bought size 8 cupcake liners. A hundred of them. Now that’s a lot of liners. I then went to one of the many birthday stores in the area. These are stores set up around what you need for (birthday) parties. There are party favors, plastic cutlery, paper plates, streamers, bags of balloons, and of course, candles. There are candles at the supermarket as well, but I didn’t anticipate having to go to the supermarket, so I thought I’d just get some candles and be done with it.

I went home and baked many, many cupcakes, a bit slowly, because my cupcake pan only makes six at a time, since my old oven was too small to hold a 12-cupcake tin. It was cold out, so running the oven for extra time was actually a bit of a luxury. And while the cupcakes were baking, I made royal icing. And then I rooted around for the food coloring. Root, root, root. Not near the flour, not with the baking supplies, not in the spice cabinet. Root root. I used to have it and now I didn’t. Maybe it got lost in the move? Maybe I threw it away in an attempt to be more all-natural?

No worry, I thought, scooping the icing into a plastic container, packing some icing bags and icing tips into a bag along with the cooled cupcakes. I’ll go to the grocery store and buy food coloring. I can mix it up at the cumpleañero‘s (birthday boy’s) house.

Here’s where the confusion starts. So I went to my local supermarket and poked around all the likely locations. Near the spices, near the flour, near the candy. Hmmm. And I found nothing. A restocking person and a superviser where standing there, so I thought to ask.

Here’s where I realize how weird it sounds to say I’m baking cupcakes for a friend and I want them to be funny colors.

Me: Son para teñir la crema de un pastel para un niño. (They’re to dye the frosting for a child’s cake)
SW: Habían (we used to have some)
Me: y ahora? (but now…?)
SW: una señora los compró. (A lady bought them)
Me: mmm, y dónde vive? (so, where does she live?) (I was kidding here)
SW: nervous smile
Me: Gracias. Bueno, y si no hay nada para teñir la crema, será blanca, no más. (ok, if there’s nothing to color the frosting, it will just be white.
SW: Ah sí, claro que hay. (Oh sure, of course there is).
Me: follows SW, who points to two colors of dyed flaked coconut, pink and green, and multicolored sprinkles.
SW: Ves? (see?) 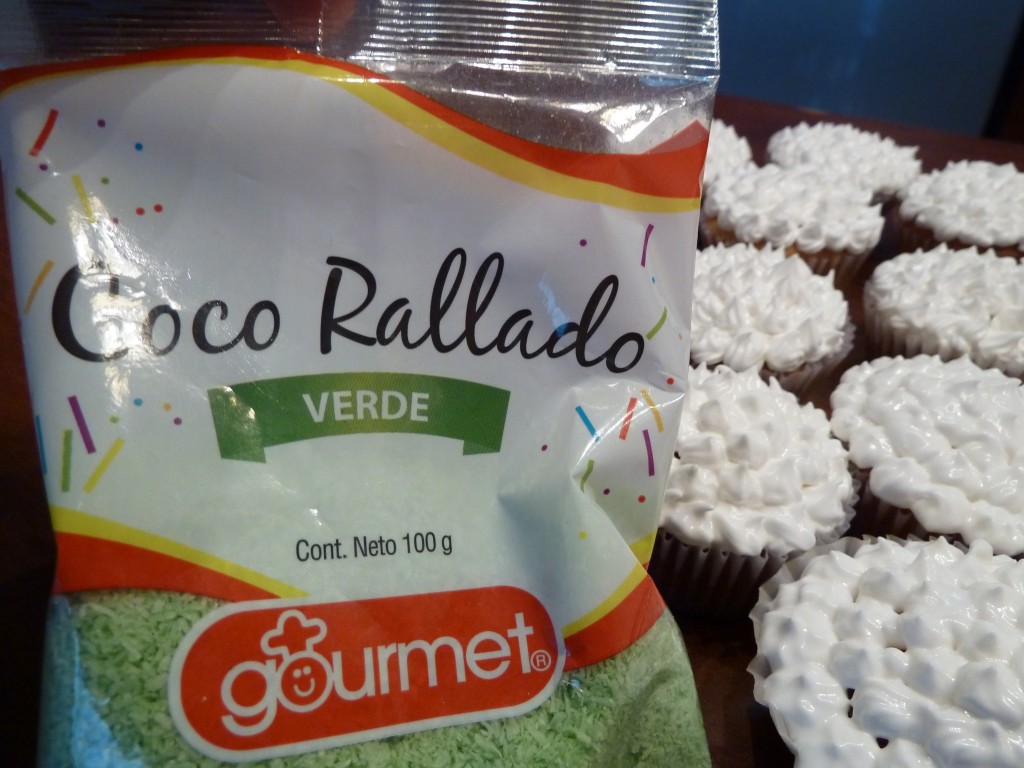 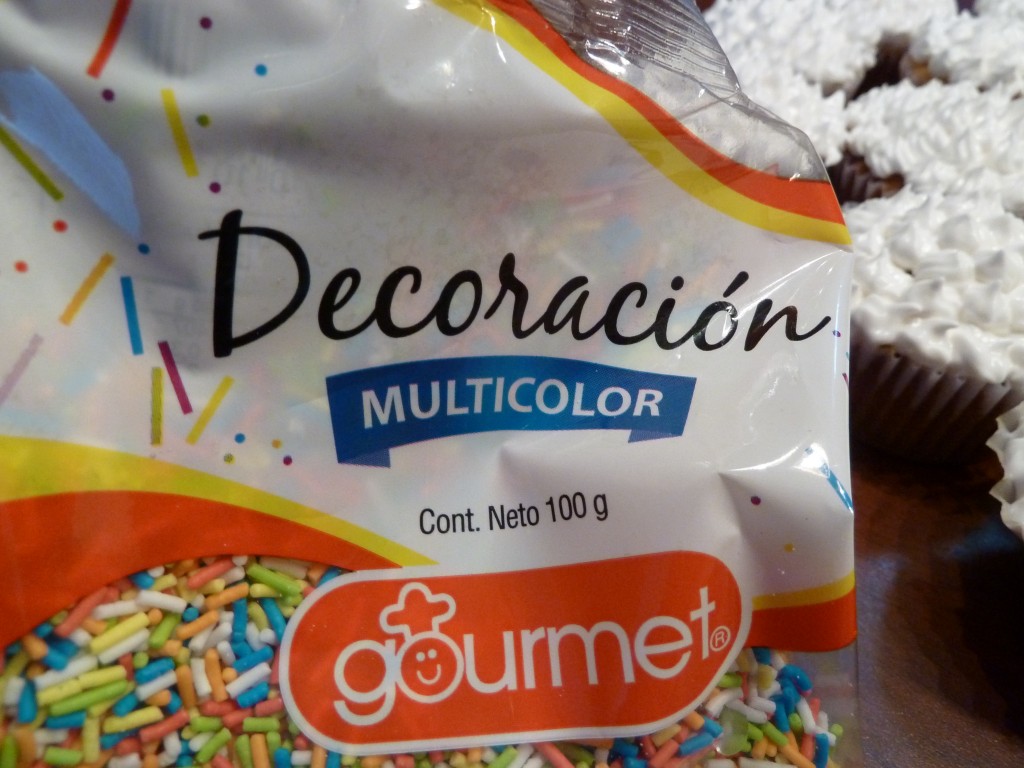 Here’s where I realize I have many options, (pitch a fit, complain, go to another supermarket, leave the cupcakes white), none of which are probably going to result in me with a box of four tiny bottles of food coloring and prettily-colored cupcakes. So I did what you do in these situations, and bought the dyed flaked coconut (green of course, as the cumpleañero is a boy) and the sprinkles, and I thanked everyone heartily and went off to decorate cupcakes and leave SW1 and SW2 to ponder why ever you’d think of decorating your cupcakes any other way. 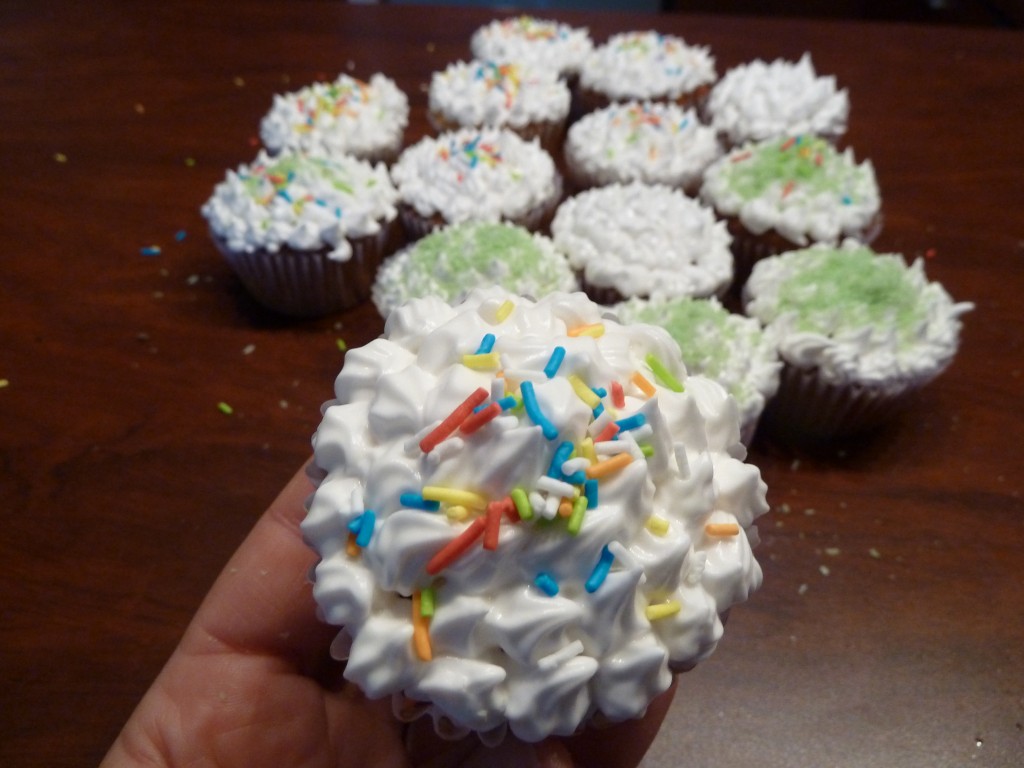 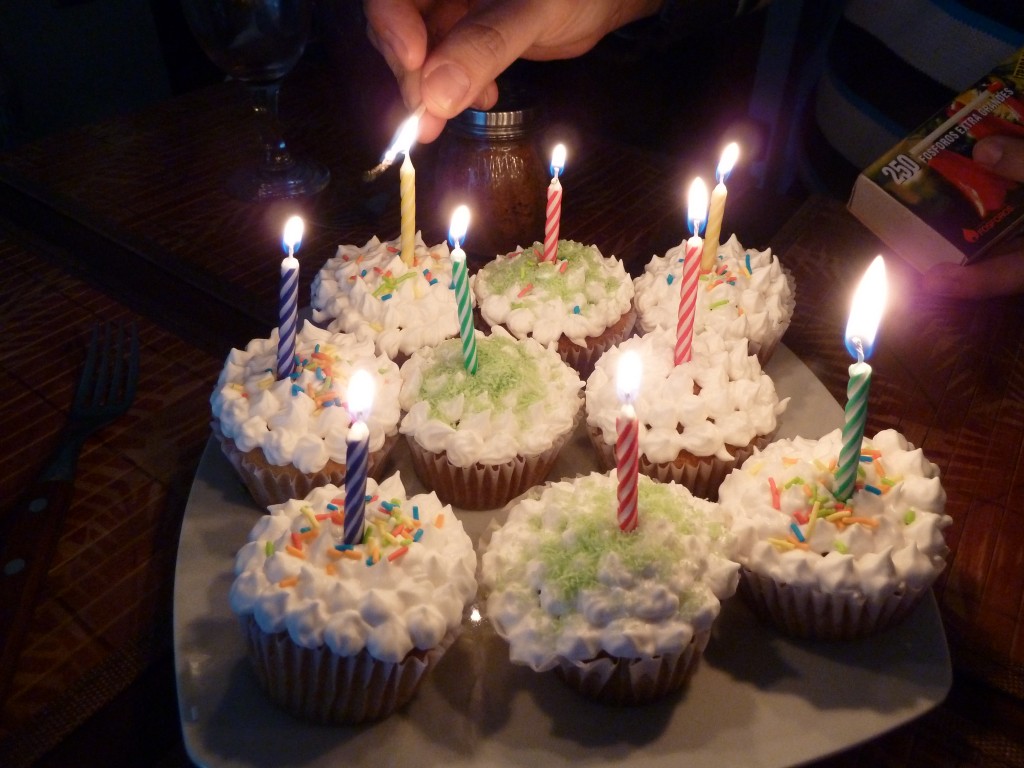 And here’s what a regular birthday cake looks like in Chile, if you were wondering. And I have, of course, since found the food coloring, not in the drawer of danger, like you’d expect, but inside the pasta collander. And no, I have not eaten pasta since I’ve been in this apartment. Or at least I have not drained it well. And a better-stocked supermarket would have had them, but here in Plaza Italia pa’bajo, odd-mostly-gringo foodstuffs are hit and miss. 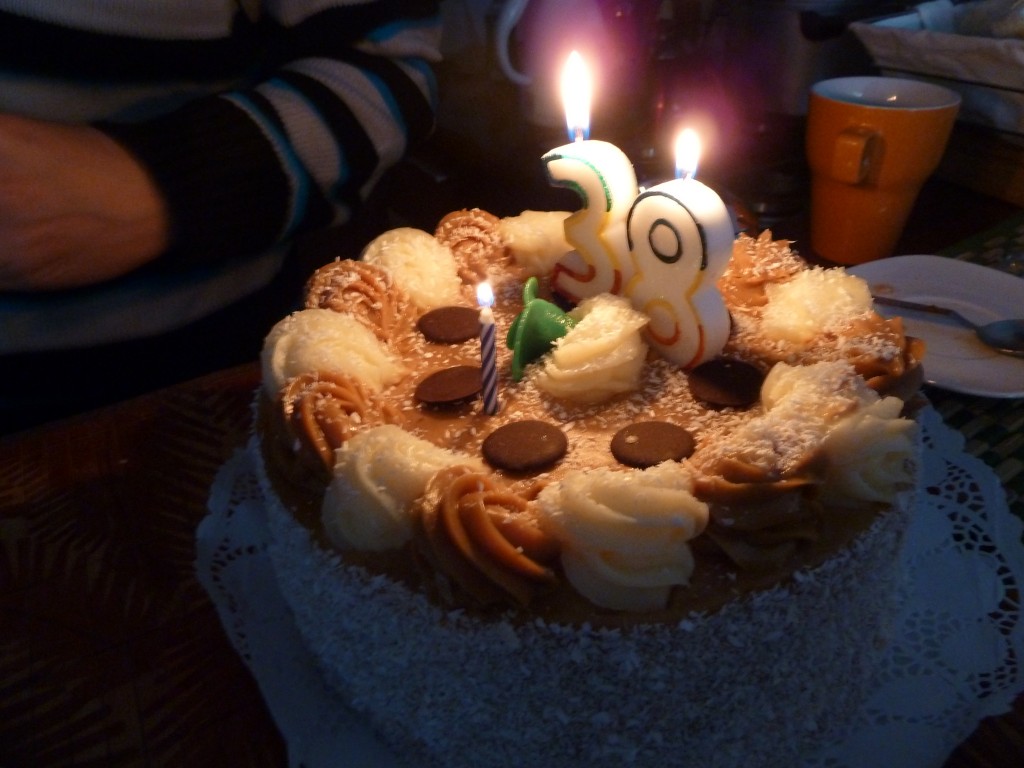