I was recently visiting a dear friend in Seattle, and since she (unlike most of the people I keep in touch with from law school) is still a lawyer, and had a hearing in Olympia, I decided to take the chance to hang out with her on the ride there and back and busy myself about town while she was in the hearing. We got really lucky and the weather held, which is a crapshoot most of the year at this parallel. She suggested a walk at the Nisqually Refuge and Wildlife Center on the way home.

We paid the entrance fee, in a little blue envelope slipped into a lockbox, which would make my Chilean friends laugh, because (they’d insist) that no one would pay if it were in Chile. But we were in Washington State, and pay we (she) did, $3 for the car, and then started out on a walk along a wooded path, hoping to see the occasional birdie or maybe a bug. Instead, we saw many, many tufts of the seed of the cottonwood tree, which gave us both pause, since we’re both highly allergic to it. But then we came to a bend and noticed some people far, far away, and decided to see where they were and what they were doing.

And then we found this: 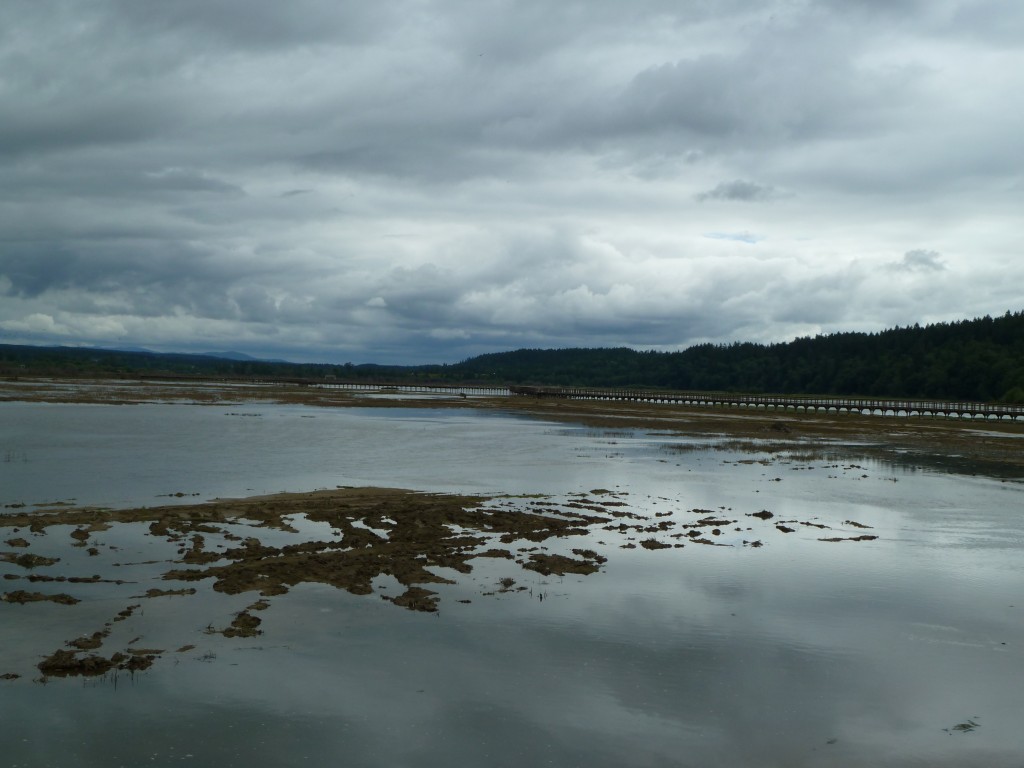 There are many, many gorgeous landscapes in Chile. I will spare you the recap and the link self-love (or will I), but we have mountains, glaciers, rivers, deserts and many, many things in between. But one thing we don’t have much of is flat, tidewater flats, deltas where the brackish water washes in and nesting seabirds call it home (or if we do, I don’t know where to find them). 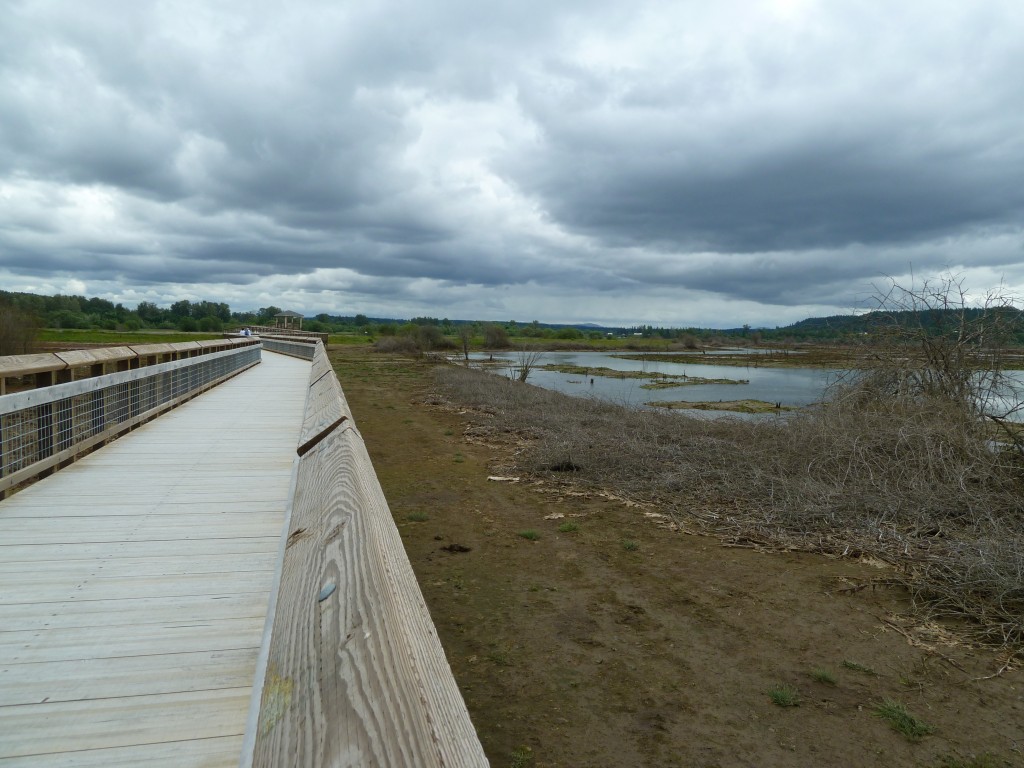 And saw this guy, and cursed the absence of the megacam, despite the fact that I do generally like the new minicam. He’s a heron, if you were wondering, and we later saw him stalk and fish a fish, which wriggled and wiggled and tried to get free, but did not. 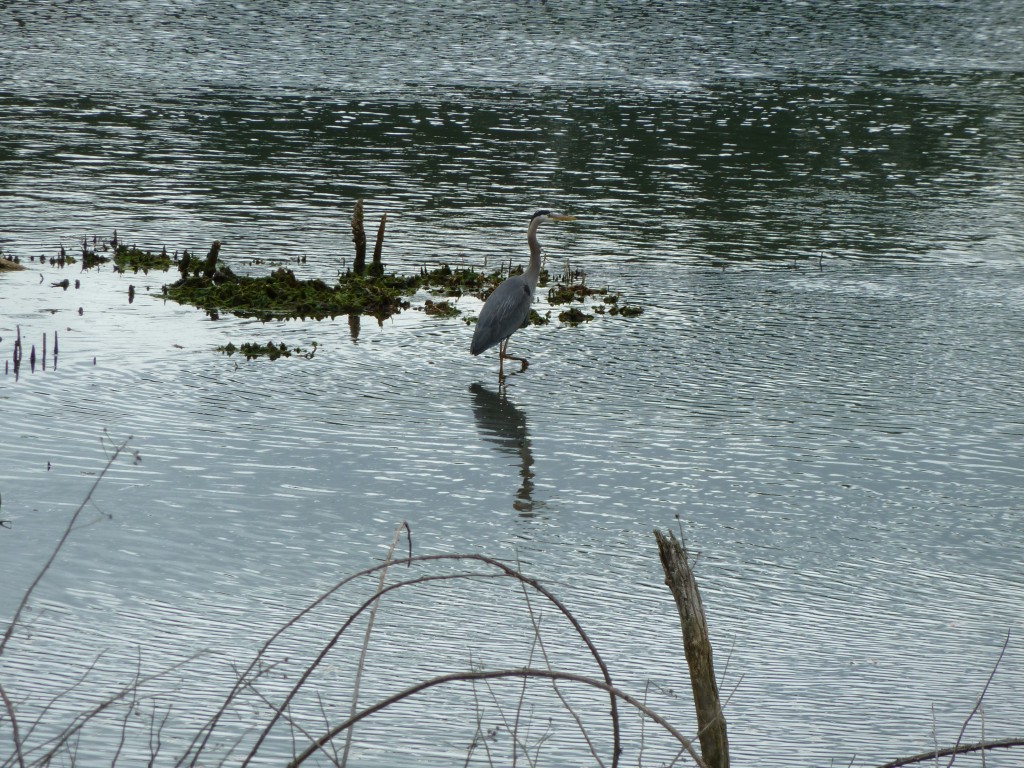 And we kept on walking, and eventually the little shelter at the end came into view, and later we came upon it. 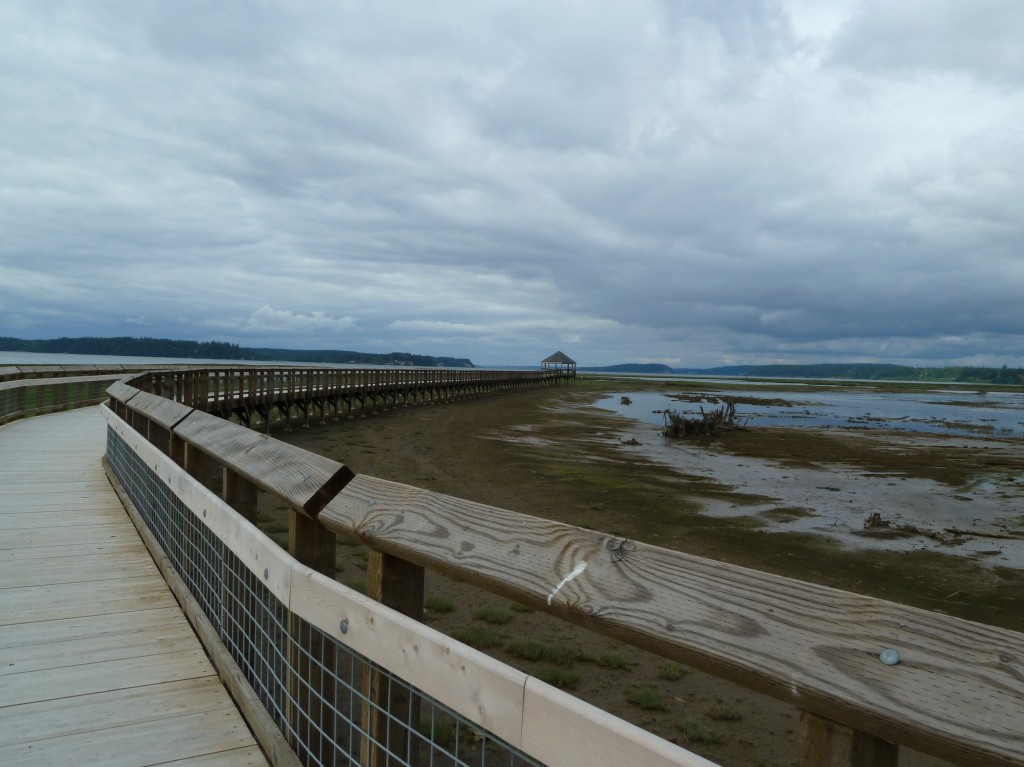 And then we were in the hut, and over to the right, we saw a bald eagle coasting on an invisible thermal, and later another eagle-looking bird which we couldn’t identify, but another birdwatcher came along and told us that the juvenile birds don’t have the distinctive white head. He also showed us where the dike had been taken out, and where the old path used to go, and my lawyer friend and the birdwatching guy talked about where you can put in kayaks, and what it’s like when you get stuck in the mudflats at low tide. Because this is Washington State, and this is what we talk about, when we’re not putting money in little envelopes because it’s the right thing to do.

I could have watched the tide come in all afternoon, but the flats were filling up slowly, and as you can see, a heavy rain was on its way. I wish I could have bottled the fresh, salty smell, which somehow smells nothing like the ocean, and could have sat on the boardwalk thinking about how the mix of water and land is never the same, even as I’d spent too much time comparing Vancouver to the south of Chile just the week before.

Because nothing really ever looks like anything, not even mature bald eagles and their young.

Travel Info: Exit 114 off I-5, 8 miles from Olympia (psst, this is the same I-5 that runs through my neighborhood in Santiago, Chile.)