Baby Bop suffers a fall, or how a drunk driver gave hundreds of kids nightmares!

The other night (let’s call it Saturday) I was on my way to meet up with some friends for libations (don’t get excited, I had a gigantic late-night coffee) and decided to go on foot. From my house I pass the Pan American highway, on which is perched the Santa Ana stop of the spiffy Santiago metro, and then toodle up the street and up the street, passing minimarkets and verdulerías (fruit and veg stores) and even De Los Reyes, a Peruvian restaurant that also specializes in sushi, and actually has a futomaki with oshinko in it, which is the only time I’ve ever seen oshinko here, so I have a special love for them.

A couple of blocks later comes the Plaza de Armas. The Plaza de Armas in Chile is like the zócalo in Mexico. It’s the central square, the ground zero for the city, from which everything fans out. This particular Plaza de Armas has a cathedral, several restaurants, a funny little roofed arcade with lots of Chilean comida chatarra (fast/junk food) including the famous completo (hotdog with unspeakable things atop), a giant indigenous man’s head as a statue, another one of a horse which I don’t remember who it is but I’m sure he’s important, people playing chess under a gazebo, etc.

There are also scads and tons and groups and lots of people. It’s a place to grab some shade, sketch for money, even do some busking if the time is right. It’s kind of a little Lima over there, too, with lots and lots of Peruvians, though calling it little Lima shows a complete ignorance, because Limeños do not come and live in Chile if they want to go somewhere else. Most of the Peruvians around are from the southern part of Peru, where work opportunities are sparse. So they come to make their lives and generally be looked down upon in Chile, the great white south (at least that’s how some people see it).

So I was walking along the Plaza de Armas, advancing towards my drink spot when I heard a soft impact, followed by an “oh!” I (along with my 800 or so best friends) turned around to see a señora splayed out on the ground, having just been hit by a car, which was speeding off into the distance, crashing into cars and pillars and posts like a ping pong ball on the way to the big bonus.

It’s a sad state of affairs that the woman was hit while walking through the plaza, poor thing, and I’m hoping she wasn’t hurt too badly. But the thing that really makes this event memorable, is that lying on the ground beside her was Baby Bop, Barney the Dinosaur’s cousin (I had to ask to find out), similarly waving her arms and legs, and moaning. A giant crowd formed, but no one took off her mask, perhaps along the same lines of how you don’t take off a cyclist’s helmet after an accident until the paramedics arrive.

I had places to be, and I don’t like the whole gawking-at-a-scene thing. There was a set of stemmed balloon flowers, and one of them had gotten away, so I brought it over to where the other ones were, and a man said to me, those are her balloons. And I wondered, if only briefly, what people would think if inside the Baby Bop costume was actually a man.

And then I continued up the street where I ran into the guy that ran the internet café I used to go to when I lived in Bellas Artes, and also came across the car (with the drunken schmuck inside) which had caused all the damage. I may not be a gawker, but I do like to take the occasional snapshot, if only with my snappy pink flipphone.

What I saw is what follows: 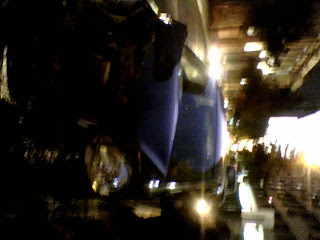 I did not, of course see it sideways, it’s just that through the wonders of modern technology, my internet connection is acting up. I’m sure Telefónica would like to believe it is not their fault, but I know it is. So sideways photos for everyone!